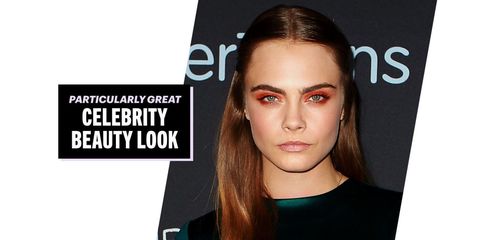 Part-time singer/full-time baller Cara Delevingne did two commendable things at last night's Sydney premiere of John Green's Paper Towns. 1) She wore an Aussie designer (Dion Lee) to an Australian screening, which more celebrities should consider doing because supporting the local talent is always cool. 2) She conquered burnt-orange eyeshadow like it wasrunning into Harry Styles—that is to say, like it was less than NBD.

I expect some of you might think she's contracted a rare form of conjunctivitis or that it's too *runway,* and you would be correct to form your own opinion even if it is foolish and about to change in a moment. The thing is, Cara's MUA could have given her a nude lip and smoky eye, but instead, she painted on a pigment that would normally have no business on anyone's face in a way that made Cara look strong and graphic and not like everybody else. (BTW, this doesn't come off as pink-eye-y because it's coppery/browny instead of red.)

But you know what really makes this a success? How much Cara seems to be feeling it:

Chelsea Peng I'm Chelsea Peng, the assistant editor at MarieClaire.com.
This content is created and maintained by a third party, and imported onto this page to help users provide their email addresses. You may be able to find more information about this and similar content at piano.io
Advertisement - Continue Reading Below
More From Beauty
Glycolic Acid Toners to Leave Your Skin Glowing
Found: All-Natural Makeup Brands That Deliver
Advertisement - Continue Reading Below
How Model and CEO Miranda Kerr Does Self-Care
Tea Tree Oil Is a Great Zit Fix for Sensitive Skin
Pretend You're on Vacation With Beachy, Wavy Hair
Moisturizers Your Dry Skin Will Soak Up
Sunscreens Developed for Oily, Acne-Prone Skin
Deep Conditioners Your Curly Hair Will Love
The Best Retinol-Infused Creams, Oils, and Serums
This Film Is a Love Letter to Perfume-Making