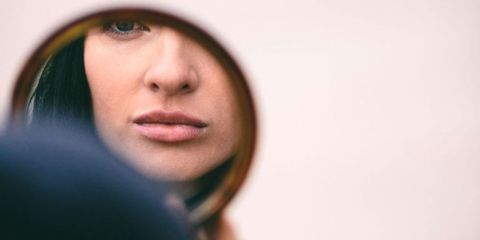 The tipping point, at least according to author Malcolm Gladwell, is when an idea or trend reaches critical mass and then begins to spread like wildfire. If you're talking about the cultural moment it became cool to wear sneakers with skirts, it's probably around the time Adidas relaunched Stan Smiths at Colette in Paris (late 2013). But if you're talking about aging—as in actually looking older—that's another story, and it's not always easy to pinpoint when it begins.

I remember when it happened to me. I was 29 and on a long weekend away with a guy I liked. The first morning we woke up together, he looked at me with concern and said, "Did you sleep OK? You look tired." I had slept fine, thank you. But when I leaned close to the mirror in the unforgiving fluorescent cast of the bathroom lights, I saw that dark circles under my eyes told a different story that no amount of shut-eye could rectify. For a friend, the moment came at 34 when she went to blend in some excess foundation between her brows, only to realize it wasn't a dark smudge of makeup. The infamous "11" lines had taken anchor, and there was no rubbing them away. Another pal told me it happened a few months after she turned 36. She arrived at her office one morning, looked in a mirror, and realized that the sleep wrinkles she had awoken with an hour and a half earlier were still embarrassingly visible on the side of her face.

Getting older—it's inevitable. But when exactly does that notice-it-in-the-mirror, complain-about-it-to-friends type of skin aging start? And can anything be done to delay it? These questions were the focus of a new research study conducted by the skincare brand Olay in conjunction with personal genetics company 23andMe and Dr. Alexa Kimball, a professor of dermatology at Harvard Medical School/Massachusetts General Hospital. Their goal was to discover what's happening below the surface level of the complexion in hopes of unlocking the golden secret of how to affect, delay, and perhaps even reverse those first signs of aging.

"We used to think everything was great until about age 35, when all the skin processes started to slow down at once," says Olay principal scientist Dr. Frauke Neuser. "But that's not what we found. In reality, different cell processes change at each decade, until you start seeing the cumulative effects all together."

After analyzing the genes of more than 200 women of different ethnicities over the course of two years, the study was able to pinpoint five different cell processes that slow or decline at five different landmark ages. The first process to decline is natural antioxidant production, and that happens in your 20s. "We always thought that you just need to moisturize and use sunscreen in your 20s, but this new data shows that skin is already susceptible to oxidative stressors and damage," says Neuser. Accordingly, the best time to start using products with antioxidants such as stabilized vitamin C, vitamin E, green tea extract, and fruit acids is right around college graduation.

When your body's metabolism starts slowing in your 30s, so, too, does the bioenergy of skin cells, which powers the creation of collagen, activates repair processes, and even helps absorb and process ingredients applied to your complexion. "When bioenergy drops, it's like your skin is getting tired and no longer firing on all cylinders," says Kimball, the study's lead researcher. She says the key ingredient for revving up the cell metabolic engine is niacinamide, otherwise known as vitamin B3, which has been shown to raise skin's bioenergy levels. (Find it in Olay Regenerist Luminous Tone Perfecting Cream Moisturizer, $25.)

Around 40, cellular "senescence" kicks in. It's a complicated process in which the natural life cycle of skin cells is arrested, and it could affect your complexion in many ways. At this point, skincare ingredients like retinol, glycolic acid, and peptides become important, because, according to New York facial plastic surgeon Dr. Michelle Yagoda, they help jump-start the cell processes that are starting to lag.

As you transition into menopause (average age: 51), skin barrier function weakens, which makes skin dry and unable to retain enough hydration on its own. (Experts say that rich  moisturizers like oils and petrolatum can help counteract the process.) Then, in your 60s, all the aging processes mentioned here dramatically accelerate. But there's good news, according to researchers at McMaster University in Hamilton, Ontario: Aerobic exercise (like jogging or cycling) twice a week has the ability to transform the protein structure of skin in those 65 and older so it more closely resembles the skin of those 20 to 40.

That's a lot of information to process, but the main takeaway is that using different skincare ingredients as you progress through life, along with exercising, will go a long way toward helping you look younger than the age on your driver's license.

The Moment You Look Old

What you're probably still wondering is when exactly these internal changes become visible. Experts say that depends on your race and, possibly, your lifestyle. For Caucasian women, it's typically around the late 30s. "This is when fine lines on the forehead and around the eyes, less-elastic skin, and brown spots and broken capillaries from accumulated sun damage crop up," says Yagoda. If you're a woman of color, the tipping point is more likely in your 40s. "African-American women aged, on average, 10 years more slowly than Caucasians in our study, which could be seen not only in skin appearance, but also in underlying gene expression," says Kimball. It's thought that darker skin provides more UV protection, but data suggest that can't be the only reason for the difference; researchers believe more antioxidant protection and higher skin bioenergy levels may also be at play. (So far, only Caucasian and African-American women have been analyzed in the study; data on Asians and Hispanics should be finished by January 2016.)

Now, here's the glimmer of hope for all of us. While reviewing the data in the Olay-sponsored study, researchers found a group of women who defied the so-called tipping point—genetic overachievers, if you will. These women all appeared at least 10 years younger than their true age. "Some were 60 but looked 39," says Neuser. Researchers weren't surprised to find women who looked younger than their actual age (after all, we all know people who inspire envy by defying nature's clock), but they were intrigued to learn that these particular women showed similar gene expression. Their skin was somehow able to robustly renew itself through the decades so that, for example, the antioxidant decline typically seen in the 20s still hadn't happened by their 50s.

Do these women have nature (DNA) or nurture (lifestyle) to thank? Scientists believe the answer is likely a bit of both, and determining exactly how much of it is related to factors like UV exposure, nutrition, and skincare will be questions leading future studies.

Their skin was somehow able to robustly renew itself through the decades so that, for example, the antioxidant decline typically seen in the 20s still hadn't happened by their 50s.

Yagoda, for one, believes that up to 80 percent of aging is due to lifestyle choices. She suggests sleeping seven to eight hours a night, following a lean-protein-rich diet that gives skin the building blocks it needs to renew, and glugging lots of water to stay hydrated from the inside out. And since some people have trouble absorbing all of the nutrients they consume, she also recommends a supplement that contains peptides, amino acids like collagen, and biotin to help replace what is lost with aging.

Keeping your skin in good shape with a regular routine and the right products can also help you defy your age, even if it can't necessarily alter your DNA and turn you into an exceptional ager. "A 60-year-old who has never done anything and buys a $200 antiaging cream just isn't going to see the same results as someone who has been taking care of her skin throughout earlier aging stages," says New York cosmetic dermatologist Dr. Paul Jarrod Frank.

As more research emerges, it may soon be common to buy bespoke products that were developed to suit your personal genetic profile. But for now, best to nurture what you've got.

This article appears in the October issue of Marie Claire.