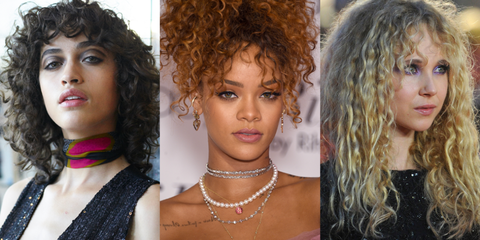 Just over a month ago, fresh off the hair study that was my Making a Murderer binge, I declared curly bangs a terrible idea. Yes, I said it. And now? I'm swallowing my words.

Let me explain—I have super curly hair and thus have always had an inherit fear of bangs, associating them with the bad kind of frizz AKA the '80s. So even when I spotted Rihanna over the summer rocking ringlet fringe with her bouncy curls, I chalked it up to the fact that it was, well, Rihanna. Like her sleeping bag coats and royal blue lipstick, they couldn't possibly work for us mere mortals.

It wasn't until Valentine's Day that I saw the light. It began backstage at Diane von Furstenberg Fall 2016, where each model had their own '70s-inspired 'do. Among them was new-model-on-the-block Alanna Arrington, who sported a shoulder-length head of ringlet curls complete with glossy curly-Q bangs. They were perfect.

Then, that night, I watched the premiere of Vinyl, Martin Scorsese and Mick Jagger's new '70s-era HBO drama, and became completely obsessed with Juno Temple. Full disclosure: we have the exact same frizzy blonde hair, so I'm a little biased. But I loved everything about her rock 'n' roll style, including her unapologetically kinky bangs.

At that moment, I realized that curly bangs are 1) Becoming a thing and 2) That I totally should have seen this coming because we're in the midst of a natural texture renaissance. Why shouldn't bangs be getting in on the fun?

While I'm not brave enough to go for the fringe chop just yet, I'm already contemplating investing in curly clip-in bangs and have no doubts that fringe will continue to become more crimped, corkscrewed, permed, and spiraled.

Lauren Valenti Associate Web Editor I’m the associate web editor at Marie Claire.
This content is created and maintained by a third party, and imported onto this page to help users provide their email addresses. You may be able to find more information about this and similar content at piano.io
Advertisement - Continue Reading Below
More From Beauty
Shampoos That'll Make Your Hair Grow Super Fast
This Beauty Brand Is Restoring Priceless Art
Advertisement - Continue Reading Below
This Tiny Tool Gives You a Cryo Facial at Home
Stylists' Secrets to Fast-Growing Hair, Revealed
At-Home Laser Hair Removal Devices That Work
This Magic Hair Straightener Brush Is On Sale
Crest's Cult-Favorite Whitening Strips Are On Sale
Marie Claire Editors Share Their Favorite Mascara
This Techy Rotating Curling Iron is On Sale
The Brow Growth Serums That Really Work