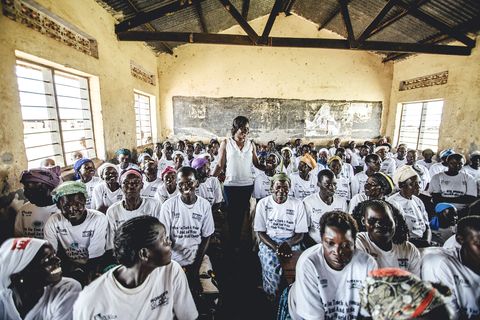 When Urban Decay, the cosmetics giant known for its cool-girl-power ethos, invites me to Uganda to check out the work of an NGO it supports—the Women's Global Empowerment Fund (WGEF)—I pack my mosquito net and get on a plane, obviously. After traveling for two days, I arrive in Gulu, a town in the north, a region ravaged by a brutal decades-long civil war that finally calmed in 2006. During the crisis, NGOs from around the world flocked to help aid the millions in IDP (internally displaced persons) camps, who, after being driven south, had returned to their native land to find they had nothing left. As the settlements eventually evolved into functioning villages, many NGOs moved on. WGEF remains.

Though the tides are slowly turning, Uganda is a patriarchal society. With so many men disenfranchised after the war, gender-biased violence is common. Reproductive health is scarce. AIDS is a major issue, as is teen pregnancy. One person making a difference is Karen Sugar, the founder and executive director of WGEF. After we sit down for a couple of Nile Specials (the local beer) at our modest hotel in Gulu, I get her talking about her work in social justice, and the depth of her knowledge and passion is palpable. An ardent belief in microfinance, a desire to go where she could "make the most impact," and a series of fortunate connections led her to northern Uganda, where she eventually founded WGEF in 2007.

Later, after she schools me in the fine art of catching a "boda boda" (a motorbike that serves as a taxi), Sugar and I make our way over to WGEF's bare-bones office, where I meet a series of amazing, strong women, and a few good men, too. Program director Bukneyna Muusa is a warm guy with the loveliest smile ever, and his devotion to the program is more than apparent. "He's the least sexist man I've ever met," says Sugar with a laugh. Muusa introduces me to "The Lucky Girls," a group of clients (NGOs refer to aid recipients and program participants as "clients") who work on the Healthy Periods Initiative, one of WGEF's programs, by making otherwise inaccessible sanitary napkins and distributing them to schools. They put me right to work, and we spend a couple of hours producing the pads using a hand-pressing method and specialty machines that Muusa traveled to India to purchase. Some women share their stories, and many are sadly similar: parents killed in the war, rape, teen pregnancies. But today, as we work alongside one another, they're smiling. "When clients first come here, often they're very shy, even afraid to speak," says Muusa. "It's amazing to watch them find their voices."

Through the end of March, 100 percent of the proceeds from sales of the brand's Eyeshadow Primer Potion will benefit WGEF.

Education is crucial to female empowerment the world over, but here in Uganda, it can be difficult to attain. A public school system exists, but many families are barely scraping by. (The average Ugandan makes about $1.25 a day; women, even less.) During the war, few went to school, so another of WGEF's programs, the Literacy Project, seeks to help close the gap. The next day, we travel to a school where I meet 200 women, young and old, learning to read and write for the first time. They're justifiably enthused by the new skills they've fought so hard for. We also visit Mama Grace's School for children, recently started by Akello Grace, a WGEF client success story: Though Grace suffered untold hardships during 10 years in the IDP camps, today she is an entrepreneur, a district council representative, a women's rights advocate, and a community leader. In other words, a total badass.

Urban Decay got involved with WGEF when co-founder Wende Zomnir connected with Sugar in 2014. The company had recently formed The Ultraviolet Edge, a global initiative to partner with nonprofits aimed at female empowerment. Through the end of March, 100 percent of the proceeds from sales of the brand's Eyeshadow Primer Potion will benefit WGEF.

For Zomnir, a self-made businesswoman, working with WGEF was a no-brainer. "I was personally attracted to [their] efforts to foster entrepreneurial spirit, but the structure and the way they accomplish this is also unique. Karen and WGEF empower the women they work with to find their voices, giving them the confidence to become leaders in their communities and fight for the rights of women everywhere," she says. "It was important to me that any organization we were going to partner with would go beyond a handout—WGEF's work has helped to cultivate a sisterhood, building community support and helping women create their own paths to success."

"WGEF's work has helped to cultivate a sisterhood, building community support and helping women create their own paths to success."

A day later, I attend the opening of a new Urban Decay–funded women's community center, where locals can attend seminars, use the Internet, and obtain other resources, such as peer counseling courtesy of WGEF's Access to Justice program, which helps women identify and exercise their rights in court over stolen-land disputes, domestic violence, and other issues. I'm particularly inspired by Aloyojok Prisca, a client who now serves as chair of the program. Like Grace and the many other women I've met, her leadership prowess is not only formidable—she projects authority as she leads an Access to Justice meeting I sit in on—but also seems to come naturally. Confidence suits these ladies. When I ask Sugar if it's a matter of teaching a woman "to fish," she says no way. "These women are more than capable. They already know how to fish," she explains. "It's more about helping to provide opportunities and resources that simply weren't there. Then, wow, look at what they make happen!"

My visit also coincides with Gulu's annual drama festival, a competition in which women from all over the region present poems, songs, and dances critiquing the patriarchal status quo. The theme this year is "Access to reproductive health care is my right," and while women of all ages participate, I'm especially blown away by some of the younger girls and the brave, proud way they ascend the stage and command the audience's attention. It's like witnessing an extremely powerful women's movement. The winning team, a group of traditional dancers, takes home the grand prize, a bull. (A few goats are on hand for runners-up.)

During the long journey back to the airport in Kampala, Uganda's capital, Sugar tells me she's already dreaming up new plans, such as establishing a local radio show to help promote community involvement. "We can never, ever stop working," she asserts. There's no question in my mind: She, and the amazing women of Gulu, won't give up. In fact, they're just getting started.

To donate directly to the Women's Global Empowerment Fund, visit wgefund.org. This article appears in the March issue of Marie Claire, on newsstands now.

This content is created and maintained by a third party, and imported onto this page to help users provide their email addresses. You may be able to find more information about this and similar content at piano.io
Advertisement - Continue Reading Below
More From Beauty
Cool Braids to Steal the Show With This Summer
24 Hours With Instagram's Favorite Makeup Artist
Advertisement - Continue Reading Below
Cream Eyeshadows That Won't Ever Budge or Crease
Vitamins for Your Shiniest, Healthiest Hair Ever
NATIVE Deodorant Is a Clean Beauty Miracle
There's a BB Cream for Every Single Skin Type
Consider This a Sign to Get a Lob This Summer
Foot Peels Are Your Satisfying Secret to Soft Feet
Bronzers That Leave Your Skin Sun-Kissed & Glowing
The Dry Shampoos You Can Count On