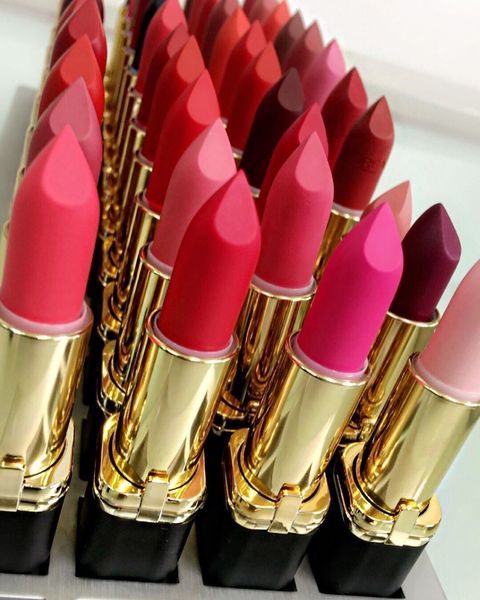 Yes, we fantasize about casually shopping the Balmain store like a Kardashian-Jenner. But in reality, spending a month's rent (or more) on one of Olivier Rousteing's creations is nothing more than a pipe dream...

Or at least it was until Rousteing announced that Balmain would be releasing a lipstick capsule collection with L'Oreal Paris. Yes, the couture gods are smiling down on us now.

BECAUSE WE ALL WORTH IT #balmainxloreal Coming soon...

Since the initial announcement, the designer has posted several teasers of the lipsticks, which appear to come in a variety of reds, pinks, and purples with both metallic and matte finishes. All of them are housed in sleek gold bullets.

WE WORTH IT #balmainxloreal Coming soon

According to WWD, the collection features 12 shades in total and in addition to designing the hues and packaging, Rousteing will oversee the ad campaign. And given his famous #BalmainGang besties, our guess is that it will be a star-studded situation.

So how long do we have to wait? The collection will be unveiled this coming September ahead of Balmain's Spring 2018 show at Paris Fashion Week. L'Oreal will be the makeup sponsor, of course. "With this collaboration, I'm thrilled to make this idea tangible for every woman around the world," Rousteing told WWD.

So while many of us may never be able to fund a Balmain dress, we can be sure to get our fix with a new signature lip color.

Advertisement - Continue Reading Below
More From Beauty Advice You Need Right Now
Why Argan Oil Is Your Skin's New Secret Weapon
Why You Should Be Using Chemical Exfoliants
Advertisement - Continue Reading Below
8 Best At-Home Laser Hair Removal Devices
Why You Should Switch to a Water-Based Foundation
10 Gorgeous Just-Got-Back-From-Vacay Bronzers
How to Get Rid of Your Broken Capillaries ASAP
These Mascaras Will Double Your Lash Volume
The Fall Makeup Essentials You Need Now
I Got Clip-In Bangs and They Changed Everything
Does a Coffee Habit Cause Dull, Dehydrated Skin?