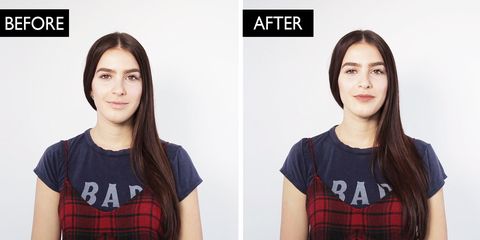 Since an episode of The Doctors suggested that you should match your lip shade to your nipple to flatter your skin tone, the internet has gone into a tailspin—literally.

Here, a slew of real women put the theory to the test and reflect on the uncharted bosom-swatching experience, as well as the final results, which range from pleasantly surprised to unintentionally grunge.

"It was really hard to match without taking my top off, but I was wearing overalls and an extremely puffy shirt underneath, and I didn't feel like dealing with that many straps. Which might explain how I came out with a shade that was a bit more PLUMMY than it looked in the tube/on my hand. (I don't have purple nipples, don't worry.) Jazmin said it looked great, though, but I didn't believe her because '90s brown lips are not my aesthetic. Nipples are a good starting point, but be smart and look at your FACE. Because that's where lipstick goes, duh."

"Because I'm on the pale side, I thought a nipple-matched lip shade would wash me out. And of course, in my head, my nips were also some adorable shade of baby pink, which I quickly realized is not the case. After swatching three colors that seemed identical, I settled on a dusty rose hue that was surprisingly flattering once applied. It grew on me so much that I stole it from the shoot—sorry, guys! I also dug how feminine the process felt... you can't get any more 'natural' than this."

"The shade I ended up with was far too pink for my face, I would have preferred an orange, glowier look to complement my tan skin. So I guess moral of the story is I wish I had orange nipples and this test did not work for me. The end. Bye."

"Generally I don't believe in science (JK, I'm not our government), but this color-matching theory is definitely onto something. It was challenging to match the lip shade with my nipple—could have used better lighting and a second opinion, honestly—so I don't think the shade I put on was actually a perfect match. I still liked how it looked, and making everyone around me uncomfortable when I told them I was wearing my nipple shade."

"I was SO EXCITED to put this philosophy to the test! However, I was underwhelmed by the end result as I own several lipsticks in the same hue anyway. It did seem flattering in a subtle way. But turns out the shock value was far more conceptual than visual."

"As much as I love color theory, I was especially skeptical about this one as the complexion on my face differs ever so slightly from that on my body. And in retrospect, it's clear I totally rushed the matching process. The shade I ended up with is darker and more purple than it should have been. I looked unintentionally grunge. Never. Again."

Marie Claire
Lauren Valenti Associate Web Editor I’m the associate web editor at Marie Claire.
This content is created and maintained by a third party, and imported onto this page to help users provide their email addresses. You may be able to find more information about this and similar content at piano.io
Advertisement - Continue Reading Below
More From Beauty
A Definitive Guide to Essential Oils for Your Skin
For Sharon Chuter Self-Care Includes Champagne
Advertisement - Continue Reading Below
The Absolute Best Red Lipsticks on Earth
Our Favorite Self-Tanners for Dark Skin Tones
Top-Rated Dip Powder Nail Kits to Experiment With
Go Platinum Blonde Without Destroying Your Hair
Tried-and-Tested Skincare Products That Work
Shizu Okusa﻿ Swears by Forest Bathing
Eye Creams That Work Wonders on Puffiness
Editor-Approved: The Best No-Streak Self-Tanners