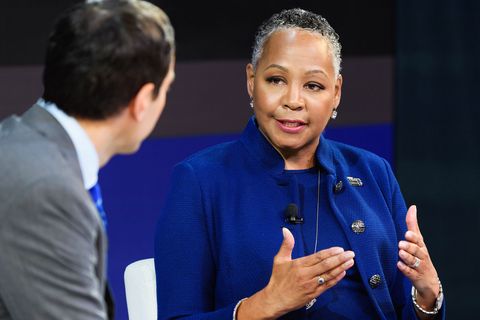 On January 1, 2018, more than 300 women working in Hollywood—actresses, writers, directors, producers, executives—published a “Dear Sisters” letter spurred by the #MeToo movement. It pledged support for less-privileged women to help ensure they too would benefit in the fight against systemic workplace sexual harassment playing out nationwide. And thus was born Time’s Up, the famous movement that includes a multimillion-dollar legal-defense fund, a drive to reach gender parity at studios and talent agencies, and a plan to push legislation that would discourage the use of nondisclosure agreements and penalize companies found to tolerate persistent harassment.

For its first year, Time’s Up was leaderless—the work was done by volunteers and working groups—but ahead of its one-year anniversary, the organization hired its first president and CEO: Lisa Borders. As the former head of the Women’s National Basketball Association (WNBA), Borders knows how to fight for women, and as the former president of the Atlanta City Council, she’s experienced in pushing for policy change. On her second day on the job, she chatted with us about what she hopes to accomplish.

Marie Claire: What did you think when you saw #MeToo going viral?

Lisa Borders: My first thought was Oh my gosh, this is terrible. But it was clear with the pickup on social media that people would not feel isolated. I remember thinking it’s horrific, but out of that trauma a new community is being formed, and that means there will be support for the survivors.

MC: When did you go from observing to realizing you wanted to help?

LB: The most impactful thing for me was hearing Oprah Winfrey when she gave her speech [at the Golden Globes], saying, “A new day is on the horizon.” I felt that was a clarion call to me personally. I know Oprah was talking to a room of people and it was broadcast live, but I felt as if she was speaking directly to me—not just encouraging me, but imploring me to come and help in this space. Working with women, particularly those in sports most recently, has been my struggle, my fight, my interest, my passion for a very long time. I see the work that I have the privilege of doing now as a very natural extension of what I’ve done my entire life. This is a special moment in time. We are witnessing an inflection point for women. I consider this the civil-rights movement of the 21st century.

Borders and Rashida Jones at an event welcoming Borders to Time’s Up.
Tina June Malek

MC: How did leading the WNBA inform your current role? WNBA players are paid less and receive far less attention than their NBA counterparts.

LB: Women are frankly not valued anywhere equal to men. We have only to look at the fact that women are paid a percentage of what men are paid on a regular basis. That is true, unfortunately, in every industry and in every sector. Working with the WNBA, I had to remind everyone that the league is only 22 years old, as opposed to its male peer, which is 72 years old. That is 50 years of building that organization, that brand, that fan base, the equity that is in that property. I don’t make an excuse. But it’s a fact that the NBA is older and more stable. The WNBA deserves that same type of recognition, but it comes over time.

Having said that, the women in the WNBA are the most elite athletes in the world. They’re incredibly talented. Corporate America needs to step up and support the WNBA the way it supports the NBA, MLS, MLB, and the NFL. The WNBA is a pretty straightforward business. There are three revenue streams: ticket sales, sponsorships, and merchandise sales. Ticket sales are still not where they need to be. For all the people who complain that women are not paid properly or should make more—and I agree with that 1,000 percent—I ask them, where are their season tickets? When was the last time you watched a WNBA game? When they tell me they never have, their questions ring hollow to me because they are part of the problem.

Working with women has been my struggle, my fight, my interest, my passion for a very long time.

MC: Do you have personal experience with harassment?

LB: I have never faced sexual harassment, but I have certainly faced discrimination. I have also faced being underestimated at every job I have ever had. I’m a woman, I’m a person of color, I am 61 years old. I have seen a lot, and I have had the opportunity to learn a lot. I have also taken that underestimation and turned it on its head. I am an overachiever. I am obsessive-compulsive about delivering results in a timely fashion, documenting what I’m going to do, delivering what I say I’m going to do, and then reminding you that I have in fact delivered.

MC: How did you feel watching the Kavanaugh-Ford hearings?

LB: I felt as if I was watching a rerun of the Anita Hill hearings. The expectation was that we would have a new outcome so many decades later. The fact that we didn’t see that meant that the opening for Time’s Up was wider than any of us could ever have anticipated. It was really eye-opening, not just for me but for all of us, to say the problem is more severe than we recognize. It is more entrenched than we could ever imagine. Three of the senators on the Judiciary Committee were on that same committee when Anita Hill was telling her truths. It made me think of the importance of voting and making sure we are appropriately and adequately represented, not just by men but by women as well. That said, as a student of the civil-rights movement, I recognize that often you will lose a battle. It happened time and time again during the civil-rights movement. But at the end of the day, the movement occurred long before the behaviors were changed.

MC: How is progress possible in a country led by a man who has been accused of sexual harassment and assault by multiple women?

LB: The only person’s behavior that you can govern is your own. It starts with each and every one of us doing what we think is right, which, number one, is speaking up and standing up for what we believe is right. You can’t worry about who is in what chair. You just put one foot in front of the other, getting the work done every single day. That’s why I came to Time’s Up. There is work that needs to be done.

LB: My son watches my behavior, and he has done so his entire life. When I am challenged, I talk with him about it. I am wildly transparent with him, which many parents are not. They want to shield their children from the things they don’t understand or they’re uncomfortable with. I don’t do that. I try to show up as my best self. But when I have questions or concerns, I share them with him. What I find is that his perspective is often incredibly refreshing and enlightening. He is a better version of me. Your job is to replace yourself with a better model. He is 2.0, and just because he is chronologically younger does not make his voice any less valuable.

MC: What are the big wins for Time’s Up so far, and what’s next?

LB: The legal-defense fund is extraordinary. It’s over $22 million, it’s housed at the National Women’s Law Center in Washington, D.C., and 4,123 women and men have come forward as survivors of harassment. We have 818 attorneys working with us on their cases. And we gave out $750,000 to organizations working in local communities on behalf of women. On a go-forward basis, we have three areas we expect to focus on: culture, companies, and law. For example, let me highlight the Google walkout [in November]. What women and men working there said is, you are not handling sexual-misconduct allegations well or transparently, nor do we have a culture that is comfortable for everyone. Those individual workers as a collective organized and walked out to put Google on notice. We have an opportunity to help Google, but it has to be sincere about the change it says it is willing to embrace. We are mindful and appreciative of Google CEO Sundar Pichai, who said he agreed with workers that the company has challenges it needs to address. So he acknowledged the problem, but how is he going to change it? We have reached out to Google and want to help. The CEO and I were at the same conference recently, and we met briefly with some of his folks. Google has a chance to be a leader in this space; its crisis is in the public domain, and so it’s a little bit on its back, but it has the opportunity to embrace change and respond to its workers.

MC: One year from today, what do you hope to have accomplished?

LB: I wish I had a crystal ball and could tell you here are the 10 things we are going to do. We are in a discussion right now about our agenda for 2019. But I can tell you we will have metrics for how to measure our success and we will be transparent about where we are in the process. And we invite folks to join us in this journey. Anybody and everybody who wants to ensure there are safe and dignified workplaces for women and, by extension, their male peers—we invite them to join us. Go to timesupnow.com and sign up for our newsletter, which will keep people apprised on not only what we’re doing but how we’re doing it.

This article originally appeared in the February 2019 issue of Marie Claire.

Related Story
Why Sexual Harassment Is a Man's Issue Too
Kayla Webley Adler Deputy Editor Kayla Webley Adler is the Deputy Editor of ELLE magazine.
This content is created and maintained by a third party, and imported onto this page to help users provide their email addresses. You may be able to find more information about this and similar content at piano.io
Advertisement - Continue Reading Below
More From Deep Dives
Inside America's Obsession With '90 Day Fiancé'
100 Women on Why They’re Voting in November
Advertisement - Continue Reading Below
Janet Mock: Up-Front and Unafraid
The Ride From Hell
Can Basic Income Help Americans Escape Poverty?
Battle for the Waves
What If Fertility Didn't Have a Shelf Life?
The First Year Out
Phoebe Robinson Is Doing the Most
Locked Down and Pregnant With Someone Else's Baby