For the fourth time in history, the U.S. Women’s Soccer Team won a World Cup title—a victory that solidified their standing as one of the country’s, or even the world's, most consistently successful teams. Upon their defeat of the Netherlands in the final on Sunday, the audience of France’s Stade de Lyon stood and chanted, “Equal pay! Equal pay!”

To call it a powerful moment would be an understatement. It was—hopefully—an inflection point. Tens of thousands of people shouting, demanding that these players, the best at their job in the world, be remunerated appropriately for their efforts and talents. Liberté, égalité, sororité.

It was the manifestation of years of outspoken advocacy by the team. In March, the 28 members of the 2015 championship team filed a lawsuit against the U.S. Soccer Federation (USSF) alleging gender discrimination. Though the men’s national team is objectively less successful than the women’s (this is the women’s second World Cup championship in a row, while the men’s team didn’t even qualify for 2018's tournament), the women earn less than half of what the men do (approximately $5,000 per game versus $13,000, per the lawsuit). The big defense against this egregious discrepancy? More people (supposedly) care about men’s soccer than women’s.

Somewhere in that stadium @shelbylcole is screaming “equal pay” at the top of her lungs and deliriously happy pic.twitter.com/iSAOeTWL9W

But, as the Wall Street Journal points out, that’s not even true: Citing audited financial records from USSF, women’s games generated about $50.8 million in revenue from 2016 to 2018, while the men’s team earned $49.9 million. They also bring in more viewers: Ratings in the U.S. for yesterday's women's final were higher than last year’s men’s final between France and Croatia and “one of the highest-rated soccer telecasts in the history of the sport,” according to Nielsen ratings reported by CNN. Soccer's international governing body, FIFA, at least, recognizes there's a problem: On Friday, FIFA President Gianni Infantino outlined a proposal to double the women’s prize money from $30 million to $60 million—though that’s still a bit short of the $440 million awarded to the World Cup–winning men’s team.

What else does the women’s team have to do to prove they’re worth at least as much as the men?

Well, that’s the thing: Most women living in America can look at those figures, understand the hypocrisy, and still know that a change in policy would signal a miracle. It’s not impossible of course—the USSF is under increasing pressure from the players and the fans who adore them. But it’s highly unlikely, because for those who perpetuate a gender wage gap, it’s not really about the money. It’s about how they feel about women’s power, and the answer is: Pretty negatively.

We should be embarrassed by this, as a nation. Women are embarrassed already: It’s humiliating and dehumanizing to know that the job you work hard to be good at, that you show up to every day, would be worth more to a company if it were performed by a man—and for reasons that have little to do with experience, skill, or future potential. In 2019, by uncontrolled wage gap measurements, a woman will still make 79 cents to every dollar a man makes.

The fact that we now have a group of outspoken, highly charismatic, repeated champions pointing this out should make us uncomfortable. In fact, where logical and lived experience fail to present a compelling enough argument for doing the right thing, the public humiliation of executives and leaders may be our best hope for change. When Infantino was booed after Sunday’s final, Rapinoe later commented that she was “down with the boo’s.” “I think everyone is ready for this conversation to move to the next step,” she explained.

And then she helpfully outlined what those next steps would look like:

‘Let’s get to the [point] of what’s next. How do we support women’s federations and women’s programs around the world? What can FIFA do, what can we do, to support the leagues around the world? We put on as players—every player at this World Cup put on the most incredible show that you can ever ask for, and we can’t do anything [to] impress more, to be better ambassadors, to take on more, to play better. It’s time to move that conversation forward to the next step and a little public shame never hurt anybody, right.’

We should feel embarrassed that our national team has to endure this kind of inequity, because embarrassment is the point. And there’s really never been a better time to make it: The fight for equal pay raged long before Trump came to power, but this administration is so openly hostile to women—and especially members of the LGBTQ community—that it’s doubly powerful when LGBTQ players like Rapinoe, Ali Krieger, and Ashlyn Harris are the ones pushing for visibility and equality.

Ironically, the administration’s attitude toward these issues has perhaps even created more space to talk about things like gender wage disparity, treatment of members of the LGBTQ community, and the value of women’s work, all in an unprecedentedly open way. By lifting up primarily the values and interests of straight, white men, everyone who doesn’t fall under that category has an even greater obligation to speak up, and to amplify one another’s voices in turn.

The members of Women’s U.S. Soccer are forcing those who perpetuate inequality to stare it in the face and then try to justify their actions. So yes, all Americans (but especially USSF) should feel embarrassed, and really embrace that humiliation. And then do something about it. 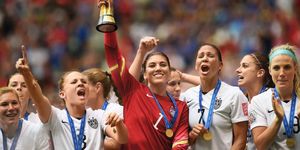 Inside the Women's Soccer Team's Important Boycott
This content is created and maintained by a third party, and imported onto this page to help users provide their email addresses. You may be able to find more information about this and similar content at piano.io
Advertisement - Continue Reading Below
More From Money & Career