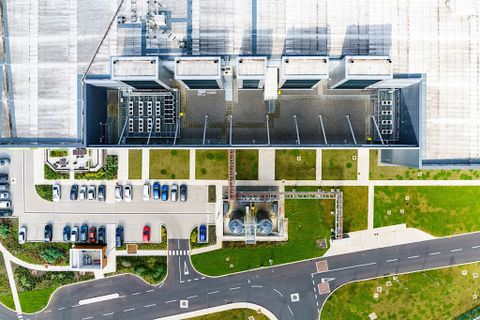 You know to bring your reusable bag to the grocery store, but did you know that every time you double tap or swipe right, you’re contributing to a global energy crisis? Data centers are the engines that run the Internet, and by 2040 the Internet-communications-technology industry (which encompasses Wi-Fi and cell phones) is expected to account for 14 percent of the world’s total energy consumption—about the same as what’s used by the global transportation industry today. We spoke with Kate Brandt, Google’s chief sustainability officer, to learn how the tech giant is tackling the problem from within.

Kate Brandt: I grew up in this little beach town called Muir Beach, which is just north of San Francisco, and is named after the environmentalist John Muir. I spent hours going to the beach and playing in the tide pools, and from a very early age developed a deep appreciation for nature. That’s ultimately why I do this work.

MC: You were the U.S.’s first federal chief sustainability officer. How did that role come to be?

KB: I joined the Obama administration in 2009 and had several different roles, all focused on sustainability. They had already done a tremendous amount of good work, but I saw an opportunity to take it to the next level. So, in 2015, we created the 10-year federal sustainability strategy, and I was appointed the first federal chief sustainability officer by President Obama. Being able to work on emissions-reduction goals and clean-energy goals was really powerful.

MC: Has the current administration impacted the work you started?

KB: The plan was repealed, however, it was replaced. I have been heartened to see that the office still exists.

MC: Now, at Google, you’re working to make data centers more efficient. What are data centers, and how can they be more eco-friendly?

KB: Data centers are the heart and soul of Google. We have 14 operational data centers, and we have others that are under construction. Each is a large campus with servers and networking equipment that make all of our products, like Gmail and YouTube, possible. We have a three-pronged strategy: efficiency, renewable energy, and offsetting our carbon footprint. Since 2007, we've been committed to operating as a carbon neutral business, and we have met that commitment every year for the last 12 years. That means we’re purchasing as much renewable energy [like wind and solar energy] as we’re consuming, offsetting our carbon footprint.

We're always striving towards innovation. One of the most interesting things we've done recently is apply machine learning. At Google, we're using machine learning across many different aspects of our business: to make Google Photos stronger, using it for Google Lens to recognize things, and many other applications. But we've also been thinking about it for our data centers, and we have applied machine learning to our cooling system [because they are running constantly, data centers get very hot and need to be cooled] and have gotten an increase of 30 percent efficiency on account of doing that. So that's been a really interesting new element.

KB: Certainly. One recent study said that data centers worldwide use about 1 percent of global electricity [more than some countries consume]. That’s why Google has our 100-percent-renewable commitment. Today, we’re getting about seven times more computing power, meaning more searches and more streaming video, for the same amount of energy we did five years ago. It’s really important to us to operate responsibly while continuing to deliver all of our products 24/7, 365 days per year.

MC: Are there things people can be doing to lower their impact?

KB: We recently announced that we have a new energy saving mode that people can use in their Google calendar and Google Keep that allows you to darken your screen and save battery life. Everyone has a critical role to play. There are great ways that people can live more sustainably and utilize technology to enable that.

A version of this article originally appeared in the August 2019 issue of Marie Claire.

Related Story
Your Everything Guide to a Sustainable Closet
This content is created and maintained by a third party, and imported onto this page to help users provide their email addresses. You may be able to find more information about this and similar content at piano.io
Advertisement - Continue Reading Below
More From Money & Career