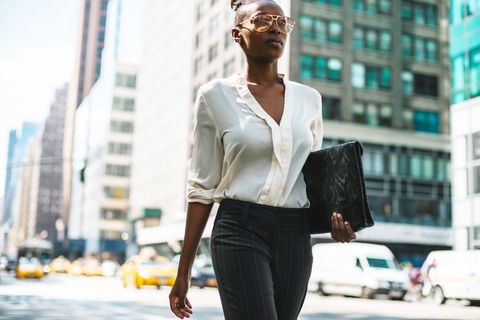 On the new ABC Family show Job or No Job, career expert Jane Buckingham encounters far scarier challenges than ingesting bugs or living with a houseful of strangers: She job-mentors youths.

Each week, a recent grad interviews with three major companies in her job field of choice, while Buckingham watches every fumble—forgotten résumés, swearing, over-talking—via livestream. It is painful...but also *really* damn informative.

We sat down with Buckingham to talk interview strategies, why it's okay to feel insecure, and the most epic way to reframe a stupid question about sandwiches. (Hey. It could happen.)

Marie Claire: What are some of the worst stereotypes about Millennial employees?

Jane Buckingham: "One is that they're so entitled: They don't want to work hard, they want a promotion after three weeks. I think a lot of the stereotypes aren't true, so what I wanted to do is help Millennials see how they're being perceived and help dispel some of those myths.

Young people today, they're so good at so many things. They can run a company's social media, they can tweet better than the CEO, but nobody taught them how to interview, nobody tells them why they should print their resume and bring it in, not just email it. Nobody tells them why it's important to handwrite a thank-you note. They come out of school with hundreds of thousands of dollars in debt and then they can't get a job. So let's help them achieve their dream."

MC: There seems to be a widespread feeling of young people feeling like the job they want isn't that attainable.

JB: "I think you feel like everybody else has it figured it out. All you see on Instagram and Facebook is 'Hey, I got my great job' or 'I'm off building houses in Guatemala,' so it seems like everybody else has it figured out but you. And it seems like 'It's all about who you know, not what you know,' and you don't know anybody. Everybody is making connections on LinkedIn, but nobody actually knows what to do about them."

MC: What's your advice for someone who's trying to go through LinkedIn? How should it be used in the job search?

Other people might have the time to help you find a job, but they don't have time to sit there talking about what you think you want to do. Use your high school or college, because people feel very loyal to their schools and often are really receptive to people.

In terms of LinkedIn, do the same thing: Look for people in your industry, but recognize that everyone is busy. Don't make it hard for them, and be very specific. 'I've done some research on you and your company, and I would love 15 minutes of your time on whatever way is most convenient for you.' And follow up—people are busy. Not every day, but follow up every week or so."

MC: What's the most common mistake that you've seen people make in interviews?

MC: What's surprised you most about working with Millennial job hopefuls on this show?

JB: "It didn't surprise me, but I guess it made me happy was how much they want it. They do want to work hard, and they do care. Another is there are some really bad interviewers out there. We always assume just because you're head of a company you're super smart and you know how to do this. But you know what? Interviewers want to be liked too. Don't assume they're a great interviewer just because they're the boss."

MC: So if you do run into a bad interviewer, how can you make up for that and still shine?

JB: "Answer the question that you think needs to be answered. Always answer questions, because they've asked that question for a reason, but also make sure you get across the point you think is important. So if they said, 'Why do you like hamburgers?' and you say, 'I love hamburgers because I find them really filling and I find that when I have a good meal I can be productive at work. If I don't have a productive day at work, I don't feel that I really contributed. Being a good contributor to an organization is really important to me, and every job that I've worked at, they've said I'm a really strong contributor to the organization.' So make sure that no matter how stupid the question or how off-topic, you get to make a point about yourself."

MC: What's the biggest difference you see between how this generation and the one before approaches careers?

JB: "I think they're more impatient. I think they expect it to happen more quickly because other things happen more quickly because social media makes it seem faster. Everybody else is getting a job, a raise, or a promotion on social media. So all of the sudden you think 'I'm the only one who isn't employed,' and you forget that it's hard and that it takes a long time. You forget that all of these things aren't just going to happen overnight.With all these tech billionaires, what you don't realize is that so many of them have companies that failed first or that it took Mark Zuckerberg several years. It didn't happen in a minute.

Having said that, I think they're really good at a lot of things. They learn by doing—they don't learn by reading and sitting around. I think they don't go about it as methodically. They don't go to their career centers—they leap in."

Job or No Job airs Thursdays at 3 p.m. EST on ABC.