Exit interviews. We all have to do them. And they're all just painfully awkward, no matter how many times you've been at the rodeo or how much you *really* hate your boss. So: Should you be honest about the fact that she is the most horrible human on earth? Should you smile and nod and say "I loved it here, it's just a really great opportunity!"? Here, your guide.

Vicki Salemi, career expert for Monster, says making a list of feedback before your grand finale serves two important purposes: 1) emotional release (DO NOT lose this draft—real life doesn't resolve itself in 30 minutes like a Disney Channel program); and 2) so you can be thorough and feel like you've said your piece because when else are you going to get this opportunity? Use your notes as guidelines during your last tango with HR.

Actual quote from Vicki: "Sure, you may be tempted to bash the company or a horrible boss, but refrain—that's what kickboxing is for." BUT IT WOULD FEEL SO GOOD, VICKI. Think about this, though: Do you want to be remembered by your smug/Louboutin-sole-red face? Do you want the interviewer to be like "Yup, glad we got rid of that crazy"? Keep it classy—more Bond villain, less Godzilla.

Step 3: Hit them with facts.

The scenario: Someone more junior was promoted ahead of you. The right approach: Suggest that another stakeholder, such as your boss' boss, be more involved in the promotion process or simply that the decision be left up to more than one person. The wrong approach: "SERIOUSLY? Bossy McBossypants is too dumb to know when people are sucking up to him, and one time I saw him take staples from the supply closet, SO WHY ARE YOU EVEN KEEPING HIM AROUND?!!!!" Never a good look.

Step 4: Smile through the pain.

Mostly because it's confusing, partly because you're still a professional, damn it. ::grabs you by the shoulders with alarming force:: Carefully chosen words > losing your temper like Kanye off and on for the past few weeks. When you peace, digital or otherwise, grin and bear it. You are Miss Colombia. You are serene. And when you're at happy hour later, you can behave however you want.

According to a recent Monster poll, nearly 30 percent of respondents have returned to a former employer. And while 51 percent said they *haven't* gone back, they also said they'd consider it because they're not picky about where they get their money from. It might be best for you to leave now, but a lot can happen in a few years—you could gain the experience necessary to ask for a higher salary in a leadership role or that nightmare boss could have gotten woke, like "Wow, I really am a garbage person," and left to become a nun. Either way, if you don't slam that first door shut, your next *next* move could be waiting for you right there.

Nailed the exit interview. But now what? Catch the premiere of new show Quit Your Day Job on March 30 at 10/9c on Oxygen. Keep an eye out for Marie Claire executive editor Lea Goldman!

This content is created and maintained by a third party, and imported onto this page to help users provide their email addresses. You may be able to find more information about this and similar content at piano.io
Advertisement - Continue Reading Below
More From Quit Your Day Job
8 Things You Should Always Do After Networking

The Working Millennial's Guide to Withstanding Career Intimidation
Advertisement - Continue Reading Below
Friends Revolutionizing What Means to Be a Lawyer
Presented by
Toyota
The 6 Emotional Stages of Having a Big Idea
How to Take Credit at Work, Because Science 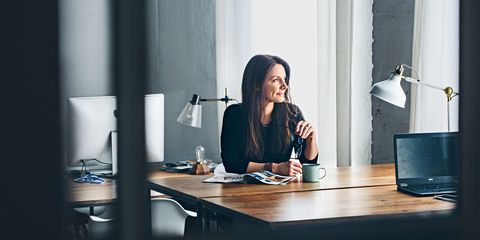