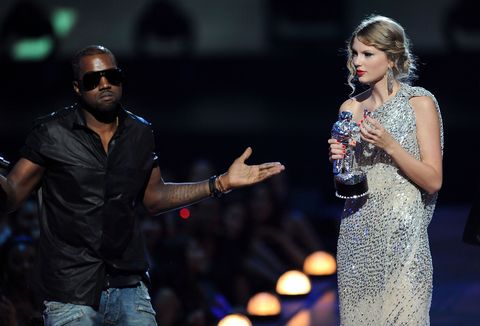 Kanye West is at it again, and by "it" we mean yet another series of rant-like musings on Twitter. This time, Kanye's ire is directed at Taylor Swift (because of course) as well as music producer Bob Ezrin, who recently accused Kanye of "excessive behavior, egomaniacal tantrums, and tasteless grandstanding."

We'll just leave that right there...

Anyway, Kanye was deeply displeased by Ezrin's remarks, and put him in his place while dragging poor Taylor (or "you know who," as Kanye now calls her) into the mix.

First up, here's Kanye scolding Bob while managing to promote his shoes:

And here he is lovingly chatting about Taylor, a woman whose record-breaking achievements he clearly respects and admires (#sarcasm):

Not quite sure why Kanye felt the need to bring up Taylor in his Bob Ezrin rant, but we assume she's too busy polishing her Grammy Awards to notice.