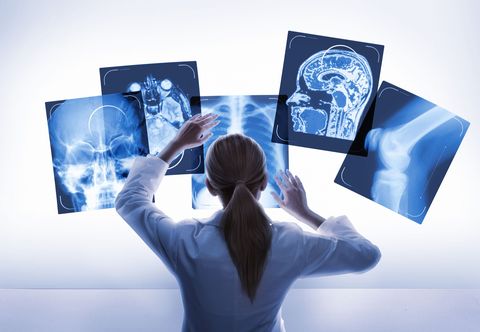 Even in a high-paying field like medicine, the gender pay gap still depressingly persists. A study published in the Journal of Hospital Medicine found that women doctors get paid less for the same work—but the reason why is pretty surprising.

The study focused on doctors who worked in hospitals, not in private practices. Hospital medicine is considered a relatively new field; most workers are under 41 and women make up one third of the workforce. Women make, on average, $14,581 less than their male peers in this field, and that's controlled for factors like age, specialty, and geography.

To figure out why, researchers used data from a survey of 776 hospital physicians, both male and female. The respondents answered questions about their income, characteristics of their jobs, and what makes them satisfied at work. On average, female doctors tended to be younger, worked fewer hours and more nights, were more likely to be pediatricians, and were less likely to be leaders at work. They also tended to report fewer "billable encounters" per shift, meaning they brought in less money, but may have focused their time on things like teaching instead.

But researchers say the biggest factor when it came to the pay gap was priorities on the job. Though both men and women said work-life balance was their top priority in terms of job satisfaction, men listed high pay as their second priority, while women ranked it fourth. The researchers say this might be because women are more likely to be in two-income households, or because they might negotiate less because they're more likely to be viewed negatively for asking for more money.

Even though women might not put money at the top of their list, it doesn't excuse the fact that they're getting paid less for equal work. "Women's tendency to prioritize substantial pay less than men may account for some of the gender pay inequities that exist in our society," lead author Dr. A. Charlotta Weaver said in a statement. "However, substantial pay is different from equal pay. I bet most women still want fair pay."