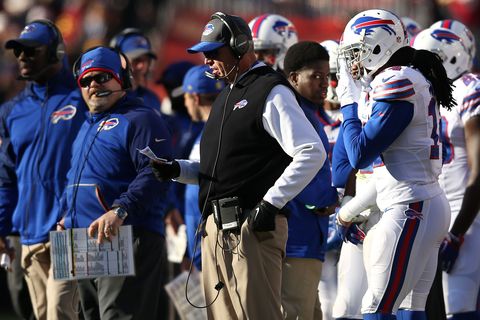 Last year, Jen Welter made international news when she was named the NFL's first female assistant coaching intern. But the organization has just one-upped itself in an awesome way: They've hired Kathryn Smith as the first-ever *full-time* member of a coaching staff. She'll be the new special teams quality control coach for the Buffalo Bills.

Smith started as an intern for the New York  Jets in 2003. For the last year, she's been an administrative assistant for the Bills. She came over to the Bills with coach Rex Ryan, who she worked with at the Jets in roles like player personal assistant and Ryan's assistant, according to NBC New York.

"Kathryn Smith has done an outstanding job in the seven years that she has worked with our staff," Ryan said in a statement. "She certainly deserves this promotion based on her knowledge and strong commitment, just to name a couple of her outstanding qualities, and I just know she's going to do a great job serving in the role of Quality Control-Special Teams."

Kate Storey Senior Staff Writer Kate is a writer for Esquire covering culture, politics, style, and lifestyle.
Advertisement - Continue Reading Below
More From Money & Career
Birchbox Boot Camp
The Couple With a Hugely Successful Finance Blog
Couples + Money
Advertisement - Continue Reading Below
Dating When You're $120,000 In Debt
How to Lead a Big Meeting With Confidence
The Couple Who Paid Off 21 Credit Cards
Couples + Money
How to Handle Being the Breadwinner
I Started a Company to Pay My Medical Bills
Shan-Lyn Ma Is Here to Save Your Wedding
These Mantras From Powerful Women Are So Inspiring
Created for From Marie Claire for Created by Marie Claire for
Stitch Fix
The Couple Who Paid Off $114K of Debt in Two Years
Couples + Money