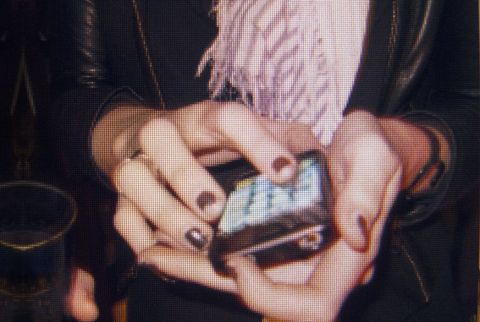 As soon as she opens her eyes, Defne Aydintasbas reaches for her iPhone. "That's how my day begins," says the 35-year-old co-owner of a New York public-relations firm. "I have clients in Europe, so there are always e-mails when I wake up, and there's only a small window of time to respond." Within the hour, Aydintasbas is fielding a relentless stream of e-mails that keeps her click-clacking on her phone all morning. Invariably, the business-related matters overshadow the personal ones. Aydintasbas' husband finds it strange that when he e-mails, say, with dinner plans, she'll respond coldly, as though talking to a colleague, "Thanks for the suggestion." ("It's hard not to sound corporate because of all the toggling back and forth," Aydintasbas explains.) And when her cousin's wife announced in an e-mail that she was pregnant, Aydintasbas was thrilled—but neglected to respond altogether. "I probably read it in bed but had four or five work e-mails to get to," she recalls. "Then four days later I remembered and thought, What kind of friend have I become?"

It wasn't supposed to be this way, this all-consuming workday that keeps us perpetually tethered to the office. After all, it was women who spearheaded the charge in the '90s and Naughts for less workplace rigidity. If we could design our own schedules, we reasoned, we'd be better girlfriends and wives and more attentive moms; we'd hit the gym more often and have more headspace for big-picture strategizing. All of which would make us less harried and more productive on the job. We'd be happier, we promised. So companies heeded the call.

But only now has the bruising reality of this new, modern workday settled in. Our hard-won flexibility has become a leash. Instead of freeing up time for life outside of work, the workday never actually ends, and we overcompensate for our independence from traditional business hours by being available at all hours. Even if you work in white-collar professions like banking or advertising, odds are you behave more like a surgeon or firefighter: When that call, e-mail, or text comes in, you jump. Economist Sylvia Ann Hewlett coined the term "extreme job" to describe the growing phenomenon of high-level professionals who log long hours—in addition to coping with unpredictable workflows, tight deadlines, and 24/7 availability. Hewlett's think tank, the Center for Talent Innovation, determined that Gen Xers like me—those born between 1965 and 1978—have it the worst. Nearly a third of us making more than $75,000 hold extreme jobs, and 28 percent of us logged more hours last year than we had just three years earlier. The pace has exacted a heavy toll: Sixty-nine percent think their jobs undermine their health, 46 percent think it hurts their relationship with their spouse, and 50 percent say it makes it impossible to have a satisfying sex life.

I can totally relate. Two years ago I decided to quit my enviable job at a magazine despite the benefits, amiable colleagues, and enjoyable work. One thing was making it unbearable: To meet my responsibilities, I had to be plugged in at all times. I was clocking in on Sunday nights and checking my e-mail from the bathroom in the middle of dates. I thought maybe my situation was unique, but as soon as I started asking around, I found many other women experiencing the same thing. It was apparently the new normal.

When I reached Hewlett on her cell phone, she was traveling by train in Wales. She described a shocking trend. "It's actually much harder for a 30-year-old woman to handle a full-time job and children today than it was 15 years ago," she said. Not only has technology enabled bosses and colleagues to find us anytime, anywhere, but it's sped everything up. "Remember the days when you sent something off and didn't get comments for two days? Now you get them in 30 minutes because everything zips around by e-mail. Expectations are different."

One of those expectations is the urgency of e-mails. Do all of them really need to be dealt with promptly? Of course not, but try explaining that to the boss who kicked you some after-hours feedback. The message didn't necessarily require a response, but not sending one feels like a dis, as though the e-mail isn't important enough to command your attention. And who wants to give the boss that impression? It's just as fraught with colleagues. The more time we spend at work, the closer we become to coworkers, which also muddies the lines between our professional and personal lives. It used to be easy to duck a friend for a few days while you dealt with deadlines and whatnot. But when your friends are your colleagues and you've got to see them every day, suddenly the responsibility of being a "good friend" becomes part of the job. Or consider how easily you might get sucked into a later night at the office than intended because the whole gang is still there, a college all-nighter atmosphere that's a mix of camaraderie and healthy (or unhealthy) competition.

Another unintended consequence of our triumphs in the workplace: We've become our own secretaries. A woman today may hold the same job her father did 30 years back, but, as Hewlett points out, "he didn't place his own phone calls or type." One professional, a director of communications for a nonprofit, who makes $80,000 a year and didn't want to be quoted by name, told me she recently spent two hours arranging flights, trains, and hotels for an upcoming business trip. "I told my boss, 'I can do this stuff, but for what you're paying me, I don't think you're getting the most bang for your buck,'" she says. He told her to hire an intern.

Negotiating the new, never-ending workday has forced some women to rewrite the rules and hope their colleagues deal with it. "You have to train your clients," says Kristin Hansen, a 40-year-old banker and mother of one in Vancouver. "If they never hear back from you on evenings or weekends, they never grow to expect it." Shannon King, a 35-year-old realtor in Washington, D.C., says the end of a serious relationship motivated her to go cold turkey on her 16-hour workdays. Now she's out of the office by 6 p.m., avoids checking e-mail after hours, and keeps her phone in her purse when she's out (instead of on the table or in her pocket). "Technology has forced me to make a very conscious decision to be present with the person I'm with," she says.

For the moment, my own solution—I now freelance—is working out. But I don't have the income or job security I once did. And I still work hard, often at odd hours. But I'm able to choose my projects. I cook lunch with my husband and take time off when I choose. Family members like to point out that T.S. Eliot turned out brilliant poetry while working full time at a bank. I tell them that T.S. Eliot never had a smartphone.