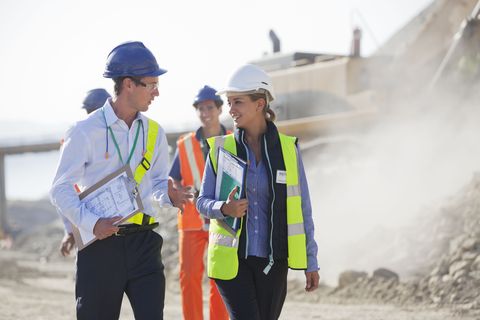 Ladies, listen up. You know that nationwide, women make just 77 cents to every man's dollar. But that average doesn't apply to everyone. In some professions, women are coming close—or even outearning their male colleagues. Below are a few of the industries that are doing things right.

The two places in the United States where the pay gap is the smallest? Washington, D.C. and Maryland. A big explanation for why these two are doing so well in equal pay is due to the large amount of people working in the public sector, or for the government. Over the past 20 years, the pay gap has shrunk specifically in these two sectors by over 15 percent—with women making 87 cents for every man's dollar today, according to the Office of Personnel Management.

This one may shock you—but the nearly all-male industry of construction has one of the smallest pay gaps, according to the U.S. Bureau of Labor Statistics. In 2012, the women that do work in the construction industry made 97.6 cents to their male colleagues' dollar. However, according to the American Association of University Women (AAUW), this makes sense: women are typically paid better in "traditionally masculine" jobs than they are in those that have been long associated with females.

Investment banking has notoriously been associated as a man's game. In comparing men and women with MBA's, however, women make 102 percent of what a man makes, according to Bloomberg Businessweek. Banking isn't the only industry with a reverse pay gap for MBA graduates exists—non-profits and human resources also favor females, with women making 102 and 107 percent of a man's salary, respectively. The numbers aren't as high, however, for women without MBA's—in this field, more education seems to have a tangible payoff.

One of the biggest complaints critics have about the gender pay gap is that it doesn't take into account the number of hours worked by men in comparison to women. In the world of part-time work, women are doing well, says the New York Times. According to the U.S. Bureau of Labor Statistics, part-time working women make $10 more than their male counterparts in weekly median salaries—$236 per week compared to $226.

Health care will always be a bustling industry—you can count on people to keep getting sick. And as such, the salaries for pharmacists and registered nurses are fairly even between men and women. The average female pharmacist makes 100% of what males make, and nurses make 91% of a man's earnings.

Teaching has long been a profession dominated by women. And unlike other jobs that are historically led by women, the earnings ratio for teachers is one of the best for ladies, according to AAUW. Secondary school teachers make 93 percent of what males in their industry do. While there's definitely still room for improvement, teachers are far ahead of many other professions.

Diana Pearl Producer Diana is a producer at ELLE.com.
This content is created and maintained by a third party, and imported onto this page to help users provide their email addresses. You may be able to find more information about this and similar content at piano.io
Advertisement - Continue Reading Below
More From Money & Career
140,000 Jobs Were Lost In December—All Women's
Allison Statter Is More than Kim Kardashian’s BFF
Advertisement - Continue Reading Below
Questions to Ask During a Job Interview
The Woman Behind Thousands of Small Business Loans
Created for From Marie Claire for Created by Marie Claire for
Bank of America
You Can't Pick Produce on Zoom
How to Afford the Freelance Life
Freelance With Benefits? You Bet.
How to (Mentally) Make the Be-Your-Own-Boss Move
The Gray-Area Economy
Black Women Are Making Their Own Space In VC