Today's Top Stories
1
The Biggest Trends From the Spring/Summer Runways
2
Where Did All My Work Friends Go?
3
Not Your Mom's Book Club
4
Iconic Fall Movies to Get You in the Spirit
5
Princess Beatrice's Daughter May Get a Royal Title
Getty Images

Fergie and her husband Josh Duhamel announced their split back in September, and the breakup is still extremely raw for the Double Duchess singer.

"It wasn’t my plan. I wanted to stay married forever,” Fergie told Wendy Williams while on her show. "I love Josh, he’s the father of my child."

Williams explained that Fergie and Josh separated in February, though they confirmed the split themselves in September. They share a son named Axl, who Fergie says keeps her and Josh bonded: "We forever have that project together and we’re doing the best we can. You’re making me cry."

Back in September, Fergie told MarieClaire.com that Josh was a huge part of her new album: "The most vulnerable songs are actually Josh's favorite songs on the album. He's heard them for years. He's been with me through the whole creation of this album and he's very much a part of it. And a lot of these songs are about many relationships. I've experienced different types of relationships in my life and they're not always romantic—though it's maybe the same feeling." 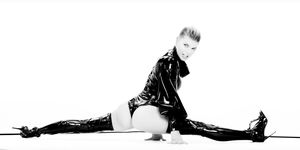 Fergie's New Visual Album Is Extremely Personal
Mehera Bonner Contributor Mehera Bonner is a news writer who focuses on celebrities and royals.
This content is created and maintained by a third party, and imported onto this page to help users provide their email addresses. You may be able to find more information about this and similar content at piano.io
Advertisement - Continue Reading Below
More From Celebrity
Ben Affleck and Jennifer Lopez Made Out in NYC
Lady Gaga Stunned in an Old Hollywood Look
Advertisement - Continue Reading Below
Olivia Rodrigo Looked Jaw-Droppingly Beautiful
Will's "Alleged Bullying" Drove the Sussexes Out
Sam Asghari Opens Up About Britney Documentaries
Prince Harry’s Memoir Is Concerning Royal Insiders
Meghan Markle Wore Some Familiar Earrings in NYC
Harry and Meghan Could Visit England for Christmas
Meghan Markle Looked Gorgeous at Global Citizen
Harry and Meghan Are Taping Their NYC Trip