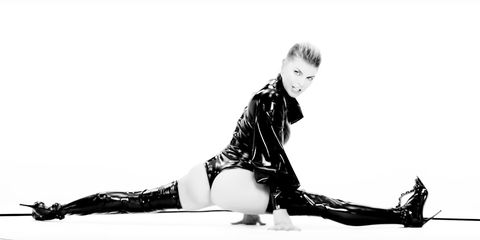 Fergie released her first solo album The Dutchess back in 2006—just three years before she wed her now ex-husband Josh Duhamel. And in what seems like an incredible case of timing, the 42-year-old singer is back and newly single ahead of the upcoming release of her second solo album: Double Dutchess. But wait. She's not only releasing a 13-set track—she's also dropping a full visual experience titled, Double Dutchess: Seeing Double and it's a.m.a.z.i.n.g.

A lot has changed in 11 years for the singer/songwriter. Double Dutchess has been over two years in the making, and was mainly inspired by the raw emotions and experiences she's developed in her personal life.

"I think it was important to make honest songs—not only ones that are fun and hip-hop, or a fun dance pop song or a reggae song. This is my time and place to get into those crevices of what's going on inside," Fergie tells MarieClaire.com, touching on her recent split with Duhamel. "I've been through a lot in my life so that's where I go. My therapy is writing it down and journaling. This is the time not only to express it lyrically, but melodically and visually."

bout to break out of my cage 🦁🦁 pic.twitter.com/F6lqHFoFKl

During the visual experience, there's a segment where Fergie self-reflects and refers to Duhamel as her "husband" (not ex-husband). She also notes that some of the subject matter goes back years.

"The most vulnerable songs are actually Josh's favorite songs on the album. He's heard them for years. He's been with me through the whole creation of this album and he's very much a part of it," she says. "And a lot of these songs are about many relationships. I've experienced different types of relationships in my life and they're not always romantic—though it's maybe the same feeling."

But despite the album's emotion Fergie still brings all of her '06 "Fergalicious"/"Glamorous"/"London Bridge" glory to the album. She collaborated with Nicki Minaj on the hit single, "You Already Know" and Rick Ross on the track, "Hungry"—both of which Fergie debuted prior to the album release, along with "M.I.L.F. $."

"Nicki's a very clever writer and her delivery is very strong and aggressive. I loved having that girl boss anthem of her being very her and me being very me—just owning our stuff and owning ourselves," she says.

More than 10 different celebrities make an appearance in the visual album including Kendall Jenner, Chelsea Handler, Kelly Osbourne, Chrissy Teigen, and Kim Kardashian. And speaking of Kim, turns out Fergie was joking about her circa 2016 comment that Kanye West's feud with Taylor Swift was a publicity stunt:

"I said that almost as a joke," she explained. "That was not a stunt—I don't think that anymore. I was just making a joke. They're all very smart and very great artists, and I was just deflecting at the time....I say a lot of things with humor and people take it a certain way and then all the sudden 'oops'...whatever."

The visual album will premiere at iPic Theaters nationwide on September 20th and the full album will be released worldwide via iTunes and Apple Music starting September 22nd.