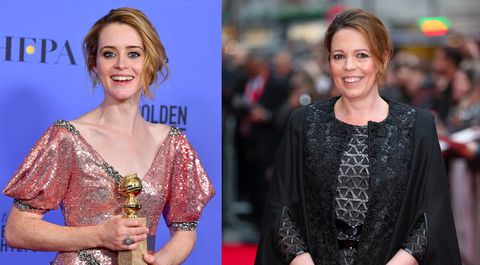 Please flail around in royal family-inspired excitement because we finally know who's replacing Claire Foy in seasons three and four of The Crown: Olivia Colman. Who, if you don't already know, IS AN ABSOLUTE GENIUS.

Colman is best known for her role on Broadchurch, which (in the humble opinion of yours truly) is one of the most impressive instances of television acting ever. However, if English crime shows aren't your thing, you might also remember Colman from The Night Manager, where she acted alongside Tom Hiddleston—and won a Golden Globe.

While actress Claire Foy will continue playing Queen Elizabeth II in The Crown's upcoming season (which drops December 8 on Netflix), Colman will take on the part once we reach the 70s/80s. The new season is said to cover from roughly 1957 to 1964.

This content is imported from YouTube. You may be able to find the same content in another format, or you may be able to find more information, at their web site.
Mehera Bonner Contributor Mehera Bonner is a news writer who focuses on celebrities and royals—follow her on Instagram.
This content is created and maintained by a third party, and imported onto this page to help users provide their email addresses. You may be able to find more information about this and similar content at piano.io
Advertisement - Continue Reading Below
More From The Crown
Princess Diana's Butler Talks 'The Crown'
Yes, Prince Charles Really Survived an Avalanche
Advertisement - Continue Reading Below
'The Crown' Copied Princess Di's Style Perfectly
Who Are Margaret Thatcher's Kids, Carol and Mark?
Who Is Sarah Spencer in 'The Crown'?
Princess Diana's Wedding Dress Is Now on ﻿Display
'The Crown' Season 4 Is Coming So Soon
Will Harry & Meghan Feature on 'The Crown'?
Imelda Staunton Will Play the Queen In 'The Crown'
Fact-Checking the Third Season of 'The Crown'