Typically, when men talk about being “man enough” it involves some sort of ridiculous, macho feat of physical strength, coupled with requisite muscle-flexing and grunting. But when Justin Baldoni talks about manning up, he issues a different type of challenge: Are you man enough to admit you’re wrong? To talk about your feelings with other men? To *gasp* cry?

The actor, who plays Rafael Solano on the CW’s brilliant/delightful/hilarious Jane the Virgin, is on a quest to disrupt the culture of toxic masculinity that teaches boys from very early ages that brute manliness is prized and feminine traits are to be repressed, lest they appear weak. “The worst insult you could give to a six-year-old boy is to call him a ‘girl,’” Baldoni says. “That’s the problem—that’s where it starts.”

"I felt like I had to adopt this tough, manly persona to fit in."

Baldoni wants to start a new conversation—one where men feel comfortable talking about their struggles and inadequacies. He’s invited a handful of men in Hollywood—How to Get Away With Murder’s Matt McGorry, Dancing With the Stars' Derek Hough, among others—to have deep, uncomfortable discussions about what it means to be a man on his new web-based talk show, Man Enough. In the lead up to the show’s premiere today, Baldoni spoke at TEDWomen on that exact topic. We chatted with him backstage about masculinity, feminism, and why men need to shut up and listen to women.

Marie Claire: Why did you want to take on the topic of masculinity?

Justin Baldoni: Man Enough is inspired by my own struggles with my identity as a man—my battle against who society told me to be. When I was 10, we moved to a small town in Oregon that was full of tough guys in trucks and they made me feel weak and I was bullied because of it. I felt like I had to adopt this tough, manly persona to fit in. I had to push away all the qualities and the attributes that the world perceived to be feminine. What I realized as I got older is that those things were some of my greatest strengths. I was the best friend that you could tell your deepest, darkest secrets to and I would be there for you. But the guys who were saying bad things about the women—the guys that wouldn’t treat them well—were the ones that always got the girls that I liked. I just was like, "What’s wrong with this system? There’s something broken here."

Baldoni (far right) goofs off with his Jane the Virgin co-stars.
Getty Images

MC: Why do you think masculinity needs to be redefined?

JB: We have an issue with masculinity in part because, if you look it up in the dictionary, it is defined by words like strength, power, and force. When you look up feminine in the dictionary, it’s described as gentle, beautiful, and pretty. We’ve put each other in these boxes and if you come out of either one then you’re this weird anomaly. If you’re a woman and you have some traditionally masculine qualities, then you’re a bitch, right? If you’re a man and you have traditionally feminine qualities, then you’re gay, right? I was like, "Wow, we have some serious deep, deep issues with the way that we talk about this stuff."

As I developed a following on social media because of Jane the Virgin­—of course, I landed myself on a feminist show—I started talking about the things that were important to me. I decided to be vulnerable and talk about my imperfections to hopefully show other men that it doesn't make them any less of a man to do it as well. Because the truth is, men are afraid to open up to each other because we’re afraid of being shamed and bullied. We’re afraid other men are going to use our weaknesses against us. I want men to go deep inside themselves and recognize the power that exists in their feminine qualities.

MC: How has that played out in your own life?

JB: One of the ways I’ve screwed up is, over the course of my marriage, I have found that I interrupt my wife quite often. In public, when she starts talking, I’ll finish her sentence for her. I don’t even know the reasons why I do it. She’s had to tell me multiple times, “Sweetheart, you jumped in again and finished what I was going to say.” And I didn’t even realize it. That means that I have been subconsciously taught that my voice is more important than hers. I have to be man enough to shut the hell up and listen. That’s an example of how men can start to look at themselves and say, "Maybe it would make me more of a man if I take feedback from a woman and I adjust my behavior. Maybe it makes me more of a man to stand up and say, 'I don’t know the answer.'" 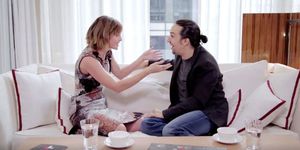 Emma Watson & Lin-Manuel Miranda Rap on Feminism
Gal Gadot: Either You're a Feminist or a Sexist

MC: I’ve heard you struggle with body dysmorphia. I’m sorry to hear that, but I have to say, it’s refreshing to hear a man talk about body issues for once.

JB: I was a skinny kid with acne and a big nose. I would watch Sylvester Stallone and Arnold Schwarzenegger and think, That’s what a man was supposed to look like, and feel really far away from that. I didn't start building muscle until I was 17, and where I grew up, muscles meant something. So, when I look in the mirror, I still see the kid who was bullied, who was never tough enough or strong enough. I get anxiety when I see there’s a scene where I have to take off my shirt. But if I ever talk about those insecurities, I get made fun of. “Oh, please, Justin. Is your six pack not good enough? You don’t have an eight-pack today?” It’s a different type of bullying.

Let’s be real: Objectively, I know I have one of the better bodies on television. But that doesn’t negate how I feel about myself. And I realized a lot of my male friends feel similarly. How many guys are working out because they want to, or because they want to be the perfect definition of a man? And how many of those guys, when they look in the mirror, feel like they’re not enough?

MC: Why do you think some men have a problem calling themselves feminists?

JB: I’ll be very honest, it took me quite a while to even admit that I was a feminist because I was ignorant of what it meant to be a feminist. I grew up believing in equality—believing that women and men were created equal and that we could be stronger together—but I didn’t know that made me a feminist.

"Maybe it makes me more of a man to stand up and say, 'I don’t know the answer.'"

And, also, I think what happens sometimes is, unfortunately, it’s a scary thing for men to admit that they want equality or even to say the word feminist because there’s a lot of fear that they’re going to say the wrong thing. I was absolutely terrified to give a TED Talk, especially at TEDWomen, because I know what I don't know. I don't know the experience of what it means to be born and raised as a woman—I only have the experience of being a privileged, straight man. But the reason I started talking about feminism and equality is because, as a man, I felt I needed to stand up for, and amplify the voices of, women and girls who are not given that opportunity.

MC: What does it mean for you to be talking about these topics at the same time as we have an admitted sexual assaulter in the White House and revelations about sexual harassment in Hollywood and elsewhere coming to light nearly every day?

JB: Look, toxic masculinity has always existed; men abusing their power has always existed. You could replace "Hollywood" with any industry in the world and you’ll find men doing the same things. I don't think it’s more relevant now. The difference is that we’re waking up, we’re able to recognize it more, we have more names to it. How many women for how many years were abused or harassed and couldn't say anything because they were afraid? Now they finally can. It’s like a zit: there’s all this gross, nasty shit that need to come out, but once it has, we can heal.

More from TedWomen
"Sexism Is a Man's Issue"

MC: You seem like one of the good ones. How can we get more men to think like you do?

JB: I don’t think it’s about getting all men to think the way that I do; I think that everyone has their own idea of what it means to be a man and that’s totally fine. But I do think there needs to be a conversation where both sides listen. It’s really, really important that men listen to women. That they hear their struggles, their anguish, their stories of sexual assault, their stories of discrimination, and they shut up, listen, and then they do something about it.

I also think it’s important for women to be patient with their men. Try not chastise them to the point where they never want to try again. Because it’s inevitable—we’re going to screw up. And this is not me as a man telling women to be patient. What I’m saying is, as a man, I know the only way I’m going to figure this stuff out is if I have the support of the woman I love. I will mess up and say the wrong thing and interrupt my wife because it’s a learned behavior I’ve done my whole life. I don’t have all the answers—all I’m trying to do is start a conversation.