Today's Top Stories
1
How to Donate Money for COVID-19 Medical Supplies
2
Sweatpants You Can Wear From the Couch to Brunch
3
'Killing Eve' Season 3 Review: What's Old Is New
4
Easy Ways to Look Better In Your Next Zoom Call
5
The Struggle to Get an Abortion During COVID-19
HBO

Welp, if you were hoping for any chance of Game of Thrones coming back to our TV screens anytime soon, we hate to break the news but season 8 won't be returning until 2019. Yes, 2019—as in we have to wait another full year...plus. 😫 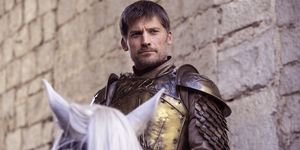 HBO has yet to confirm the season 8 premiere date, but GOT actress Sophie Turner, who plays Sansa Stark, revealed in an interview with Variety that the highly-anticipated final season won't be returning until 2019. When asked about where the cast is currently in production she says, "We started in October, so we’re maybe like a tenth of the way through. No, no, we’ve got six or seven months left."

While discussing the return date, Turner also teased her character's season 8 storyline. “This season, there’s a new threat, and all of a sudden she finds herself somewhat back in the deep end. And without Littlefinger, it’s a test for her of whether she can get through it...This season is more a passionate fight for her than a political, manipulative kind of fight.”

The good news is you can hold yourself over by strategizing *exactly* what will happen during season 8 with these fan theories below. R.I.P. to our sanity. 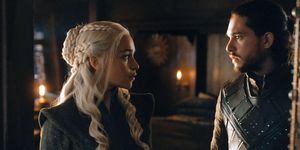