Ava DuVernay is making history. The Oscar-nominated filmmaker is at work putting the finishing touches on her highly anticipated adaptation of Madeleine L’Engle’s 1962 science-fiction classic, A Wrinkle in Time, which hits theaters on March 9 and stars Storm Reid as Meg Murry, a brainy, headstrong girl who travels through time and space to rescue her father (Chris Pine)—and possibly save the universe—with the guidance of some wise, magical women (played by the wise, magical Oprah Winfrey, Reese Witherspoon, and Mindy Kaling). The buzzy film marks the first time a woman of color has directed a live-action film with a budget of more than $100 million.

“I never had any intention of making a $130 million movie,” DuVernay insists, sitting inside the private Burbank, California, screening room that once belonged to Walt Disney himself. The idea didn’t occur to her because there were simply no precedents: Where were the black women filmmakers operating at the James Cameron and Christopher Nolan level in whose footsteps she could follow? That’s one of the reasons DuVernay founded ARRAY, an indie-film-distribution company and resource collective composed of “arts advocacy organizations, maverick volunteers, and rebel member donors worldwide,” dedicated to boosting movies made by women and people of color. She reels off a litany of brilliant African-American women—like Julie Dash, Kasi Lemmons, Neema Barnette—“who have made gorgeous films, who I can look to for their work,” yet have struggled to find funding and move up what she calls Hollywood’s “invisible and ridiculous ladder.” So DuVernay says her goal is simple and strategic: “To keep making films of any size. That’s why I make documentaries and features and television and commercials.”

"Every scene has to be literally steps on a ladder taking you to a higher place. That's what I challenge myself with."

Surprisingly, she didn’t pick up a movie camera until she was 32 years old. The Los Angeles native, who still calls the city her home, worked as a Hollywood publicist and marketer for more than a decade. While hanging around film sets, she found herself silently critiquing directors’ decisions. “I would watch them and think, I wouldn’t have the actress walk there. She should probably walk there and the camera should move this way.” Eventually DuVernay realized, I could do this. Her first narrative feature, I Will Follow, came out in 2010, and several critically acclaimed films ensued, including the Golden Globe– and Oscar-nominated Selma (2014) and the 2016 mass-incarceration Netflix documentary 13th, along with the 2016 OWN TV drama series Queen Sugar,renewed for a third season last summer. After this string of emotionally complex, realistic portraits of African-American life (all of which she wrote, directed, or produced), few would have expected 45-year-old DuVernay’s next move to be a mega-budget science-fiction spectacular.

Although DuVernay didn’t read Wrinkle as a kid (her nose was stuck instead in Sweet Valley High and Nancy Drew books), she now finds it holds some deep messages. “It’s a book that takes place out in the universe, but it’s really about interiority. It’s about who you are to yourself...how you see yourself from the inside out."

“Meg is imperfect,” DuVernay continues affectionately of her protagonist. “And her journey is not to become perfect, but to embrace her faults, to know that no one is perfect—not even her father, who she thought was going to be the solution to all of her problems.”

Meg Murry is an impatient, idiosyncratic young character whose adventures have inspired readers for more than half a century, and, thanks to DuVernay’s movie, will rouse a new generation. Meg taught us that “we can step through life embracing those imperfections, unafraid of sharing them with others,” which, DuVernay says, is “such a powerful philosophy.”

Related Stories
'A Wrinkle in Time' Character Posters Are Here 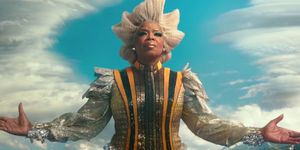 Disney's 'A Wrinkle in Time' Trailer Is Amazing

Now in the final throes of postproduction on the movie, DuVernay is pulling some all-nighters to make sure every scene dazzles. “One of the great things about A Wrinkle in Time has been world creation, being able to play with big visual effects and all that stuff that so few women and directors of color get to do,” DuVernay says. “For women and people of color, sci-fi takes on a much more potent space in our consciousness and imagination. It feels a lot more robust when I read the work of sci-fi or fantasy writers who are women, or women of color, because there is a muscularity to it that speaks to a present, a real situation, and it’s not just escapism for fun’s sake. It’s escapism for survival, for sanity—it’s imagining a world that’s not here.” DuVernay is taken with the genre and is currently developing Dawn by Octavia E. Butler, the African-American science-fiction author’s novel about a woman tasked with resurrecting humanity post-nuclear-apocalypse, into a TV show.

"For women and people of color, sci-fi takes on a much more potent space in our consciousness and imagination."

Wrinkle involves a scale of production light-years beyond DuVernay’s previous films. “Until now, I had budgets to make movies about people talking in rooms,” she says, noting that she made I Will Follow for just $50,000. “But with Wrinkle, there are no rooms, there are no limits!” she says, her eyes watering slightly underneath her black-rimmed glasses. “There are only doors to walk through.”