Ellen Pompeo—you might know her as Dr. Meredith Grey—just accepted a huge pay raise for Shonda Rhimes' hit TV drama, Grey's Anatomy. But more importantly, she's decided to open up about her behind-the scenes fight to get "what [she] deserves" when it comes to her salary, with hopes of empowering other women in Hollywood to do the same.

In an interview with The Hollywood Reporter, Pompeo said, "I'm 48 now, so I've finally gotten to the place where I'm OK asking for what I deserve, which is something that comes only with age. Because I'm not the most 'relevant' actress out there."

Pompeo originally refused to audition for the show, recalling that she was supposed to be a movie actress and was "not going to be stuck on a medical show for five years." Flash forward 14 years and she's still working in the TV medical field.

"But the truth is, anybody can be good on a show season one and two. Can you be good 14 years later? Now, that's a f*ckin' skill," she said. 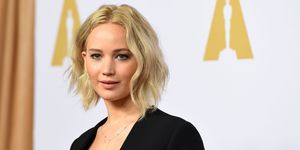 Jennifer Lawrence on How She Crushed the Pay Gap

And Pompeo did just that. Her new contract has her earning more than $20 million a year, which is about $575,000 per episode—this will make her dramatic television's highest-earning actress. Along with negotiating her salary, Pompeo has signed on to play Meredith Grey for another two seasons. Rhimes has said that "the show will go on as long as Ellen wants to do it."

Pompeo recounts her meetings with other Hollywood actresses about how they can affect the Time's Up movement. "We've been sharing stories and trying to figure out how we can promote change and use our voices to help other people," she said.

"I've chosen to financially empower myself so that I never have to be ducking predators and chasing trophies."

Alex Warner
This content is created and maintained by a third party, and imported onto this page to help users provide their email addresses. You may be able to find more information about this and similar content at piano.io
Advertisement - Continue Reading Below
More From Celebrity
Jennifer Lopez and Ben Affleck: Everything We Know
Harry & Oprah's Mental Health Doc Has a Title
Advertisement - Continue Reading Below
Serena Williams Might Miss the Tokyo Olympics
Jennifer and Ben Have "Unreal" Chemistry Together
The Sussexes Marked Archie's Bday in a Lovely Way
Queen's Cousin Accused of Selling Access to Putin
Meghan Wore a Meaningful Necklace for Vax Live
How Celebrities Are Celebrating Mother's Day 2021
Gabrielle and Kaavia's Mother's Day Pic is So Cute
Ben Affleck's Moving Tribute to Jennifer Garner