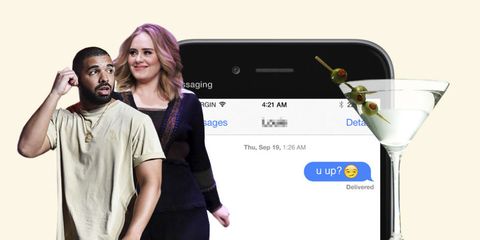 There are plenty of similarities to be drawn between Adele's "Hello" and Drake's "Hotline Bling." Both songs directly address an ex-lover who lives far away. They're both gigantic hits performed by artists in their late 20s who go by one name. Both videos arrived late in the year—four days apart in October—and yet they defined 2015. Both spawned Saturday Night Live sketches. Your grandma is probably familiar with both, an impressive pop-culture feat in and of itself.

Oh, and they are totally about drunk-dialing a person you're accustomed to boning.

In fact, Adele and Drake sound like they could be talking to each other. "Hello, it's me." "You used to call me on my cell phone." "You make me feel like I did you wrong." "I'm sorry for everything that I've done."

The relationship is dead, but the drunk dial lives.

Which is to say, Adele and Drake are all of us. Even the famous, wildly talented, incredibly attractive among us can't control their tipsy fingers. (You may recall the news last month that Adele's notorious drunk-tweeting got her basically banned from the platform.) And in fact a cottage industry of apps has bloomed to break the drunk-texting habit, like Drunk Text Savior, Don't Dial!, Drunk Mode, and Drunk Dial NO!. The site Texts from Last Night spawned a book nearly six years ago, and the endlessly depressing scroll The Last Message Received recently went viral.

This year's big drunk-dialing/texting songs don't end with Adele and Drake, of course. The Weeknd's "The Hills" falls into the "Hotline Bling" camp of writing odes to booty calls—"I only call you when it's half-past five"—while Justin Bieber, like Adele, won't stop apologizing for making "a couple of hundred" mistakes.

Drake doesn't recognize the person his ex has become. Adele is incapable of ever making things right with hers. The Weekend flagrantly admits to being a f-ckboy, but seems to hate himself for it: "When I'm f-cked up, that's the real me." And then there's sweet, underfed puppy dog Justin Bieber, whose drunk texting isn't just some one-off musical composition. It's an ongoing, IRL, remarkably relatable thirst fest for his first love, Selena Gomez.

The messaging hasn't changed, even if the medium has. Your crush, a potential hook-up, a booty call, or the ex-boyfriend who leveled your life—they're all instantly available to you the second you place your fingers on that glass. And who knows what technological advances 2016 will bring? Maybe your upcoming Tinder dates can float in via hoverboard.

It's comforting to know that our favorite musicians will be along for the ride, helping us grapple with the queasy morning-after rereading of our sent messages from the night before. Hitting "play" on a song is just as easy as hitting "delete" on a contact.

Kaitlin Menza Kaitlin Menza is a freelance features writer.
This content is created and maintained by a third party, and imported onto this page to help users provide their email addresses. You may be able to find more information about this and similar content at piano.io
Advertisement - Continue Reading Below
More From Celebrity
Kaavia Talks to a Bee in an Adorable IG Video
David Harbour on Being Stepdad to Lily Allen's Kid
Advertisement - Continue Reading Below
Ben Affleck Is "Getting to Know" J.Lo's Kids
Salma Hayek's Owl Had a Mishap With Harry Styles
Princess Diana Always Dreamed in Living in Cali
Angelina Jolie Was Spotted Leaving Her Ex's Place
What Happens on Katie's Season?
Ben Affleck Had Dinner With J.Lo and Her Kids
Jessica Biel Talked "Secret COVID Baby" Phineas
Katie Holmes Paired Baggy Jeans With a White Tank