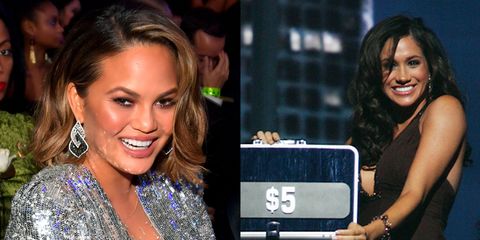 Chrissy Teigen's latest appearance on The Ellen DeGeneres Show was just as hilarious as you'd expect. Not only did the cookbook author discuss her pregnancy, and how awesome DeGeneres' star-studded birthday party was, she also revealed that she knows Meghan Markle.

Way, way back, both Markle and Teigen were suitcase girls on the gameshow Deal or No Deal. According to The Telegraph, Markle appeared in 34 episodes of the show between 2006 and 2007, while Teigen was in eight from 2007 to 2008.

And Teigen has not forgotten, as she revealed, "I tell John all the time. That could be me. I could be Princess Harry."

Teigen and Markle also both competed in DirecTV's Beach Bowl game in 2014:

While talking to DeGeneres, Teigen took the opportunity to spill some baby secrets. The model told DeGeneres, "I’m having a baby boy in the spring. I’ll tell you—it’s June!"

And as for names, her and Legend are having trouble coming up with a good name for a baby boy, as Teigen joked, "Boy names are really tough and I don’t think he will even have a middle name because we can’t even come up with a first name."

DeGeneres' amazing suggestion of "Urban Legend" was shot down, but it's arguably better than Teigen's current idea—"I’m toying with Dick Legend a lot. Can I say that?" Classic Chrissy.

With a few months left until the birth of Teigen and Legend's second baby, there's luckily still time to come up with a name.