Meghan Markle, woman who once appeared on Deal or No Deal, is set to become a British royal upon her wedding to Prince Harry on May 19—and everyone is extremely focused on her dress. Who will she wear? Will there be a train? Will she wear a veil? These are the questions that haunt royal-obsessed souls at night (hi, me)—partially because any celebrity wedding is fun, and partially because this is THE most important pop cultural event of 2018.

As we all know, there are many, many, many rules that the British royal family has to abide by—especially in the sartorial sphere. Nude tights, for example, are required by the Queen. But when it comes to a wedding dress, the applicable royal guidelines are less about the gown itself, and more about where you're wearing it.

Meghan and Harry are getting married at St. George's Chapel in Windsor, where Harry's cousin Peter Phillips (a.k.a. the Queen's grandson) married Autumn Phillips (née Kelly). And by taking a look at the top-level secrecy and protocol that went into Autumn's dress, we have a pretttttty good idea of what Meghan's Wedding Dress Task Force is going through right now.

Autumn's gown was made by designer Sassi Holford, who told MarieClaire.com that she worked closely with a representative from Kensington Palace to ensure that etiquette and royal standard were met at each step of the design process. Per Sassi, a royal wedding dress needs to be traditional, but should also be a reflection of the bride's personality. Sassi started the process of designing Autumn Phillips' gown by considering her client's "style wish list," taking inspiration from dresses Autumn already liked, and added her own detailing to reflect the bride and the occasion.

That said: The main directive for Autumn's dress—and presumably for Meghan's—was that the gown be appropriate for the event and venue.

"It is very important for the dress to fit the venue as well as the occasion," Sassi says. "The grand rooms and drama of Windsor Castle and St. George's means the dress should have enough detail to be seen from a distance, be fit for a royal wedding, and, for Meghan, incorporate the glamorous Hollywood side of her personality."

Peter and Autumn Phillips at their wedding, May 17, 2008.
Getty Images

It's likely that the final fitting for Meghan's dress will be held at Windsor castle, which was the case with Autumn Phillips—ensuring that Sassi could see how the dress moved and make sure that the skirt and train held their shape.

So, what will happen to Meghan's dress after that final fitting? In Autumn Phillips' case, it was kept on a mannequin under lock-and-key in the Queen’s private apartments at Windsor Castle.

"The making of royal wedding dresses is, by tradition, surrounded by secrecy," says Sassi. "Only four of us knew exactly the details of Autumn’s dress, and one was my head seamstress Tina, who has worked with me for 19 years."

Seems like those of us hoping to find out what Meghan's dress looks like before the wedding (hi, me again) are fresh out of luck. But definitely expect a gown as confident and stylish as Meghan is, with a train suitable for the setting, and nary a speck of dirt thanks to that lock-and-key security. 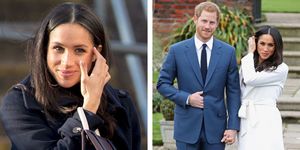 Why Meghan Markle Is Always Touching Her Hair
Mehera Bonner Contributor Mehera Bonner is a news writer who focuses on celebrities and royals—follow her on Instagram.
This content is created and maintained by a third party, and imported onto this page to help users provide their email addresses. You may be able to find more information about this and similar content at piano.io
Advertisement - Continue Reading Below
More From Meghan Markle and Prince Harry's Royal Wedding
Meghan Markle Broke Tradition With Wedding Speech
I Tested Meghan Markle's Top Beauty Products
Advertisement - Continue Reading Below
Relive Harry and Meghan's Spectacular Wedding Day
Archie's Birth Certificate Reveals New Royal Tea
Meghan and Harry's Wedding Photographer Details
Meghan Markle Curated the Royal Wedding Playlist
Harry and Meghan Act as Museum Tour Guides
An Obsessive Timeline of Harry and Meghan
Harry and Meghan Took One Risk With Their Wedding
Meghan Markle's Hidden Wedding Tribute to Harry