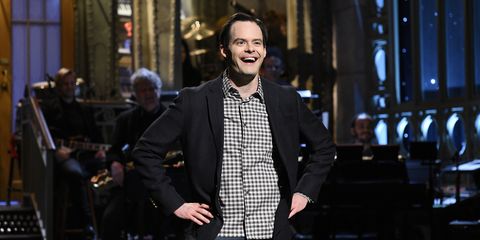 Saturday Night Live alum Bill Hader returned to Studio 8H last night as host and he was a GEM.

In his opening monologue, Hader went meta, explaining exactly what an SNL monologue is. He explained that it's a great opportunity for the host to plug an upcoming project—like his new HBO show, Barry, premiering March 25, for example. He ended his monologue with a quick change, getting into character for his part in a reprise of "The Californians."

Hader was joined by a stable of SNL heavyweights, including Fred Armisen, Kate McKinnon, Kenan Thompson, Alex Moffat, Cecily Strong, and Pete Davidson in a new installment of "The Californians," in which the group mourned the loss of Rosa and debated driving directions, as per usual. Anyone who loved Hader's original run on SNL needs to see this one.

One of Hader's laugh-out-loud funniest moments came in a sketch called "Girlfriends' Game Night." In the sketch, Hader plays Horus, the elderly husband of one of the girlfriends attending game night who tags along uninvited. Most of the comedy in the sketch comes courtesy of Horus ramming into things and people with his electric scooter. Is it simple comedy? Yes, of course it is. But is it still hilarious? Yes. Yes, it definitely is.

Finally, we couldn't recap Hader's return to Saturday Night Live without mentioning the return of Stefon to Weekend Update. No one could keep a straight face while Stefon described the hottest New York bars and clubs for St. Patrick's Day. Spoiler: Every single one is equal parts horrifying and hilarious.

Kayleigh Roberts Contributor Kayleigh Roberts is the weekend editor at Marie Claire, covering celebrity and entertainment news, from actual royals like Kate Middleton and Meghan Markle to Hollywood royalty, like Katie Holmes and Chrissy Teigen.
Advertisement - Continue Reading Below
More From Celebrity
A Look at Royal Family Portraits Through the Years
Are The Weeknd's 'After Hours' Lyrics About Bella?
Advertisement - Continue Reading Below
Kendall and Harry Had a Moment At the Brit Awards
Dwyane Wade on Getting Zaya's Pronouns Right
Harry Styles' Diana-Inspired Brit Awards Outfits
Jenna Dewan and Steve Kazee Are Engaged
Kim Seemingly Tried to Kiss Kanye on a Kiss Cam
Ashley Graham Continues to Spread Body Positivity
'Bachelor' Victoria F. & Peter's Ex Had a Fight
Watch Meghan Attend the Ballet with a Puppet