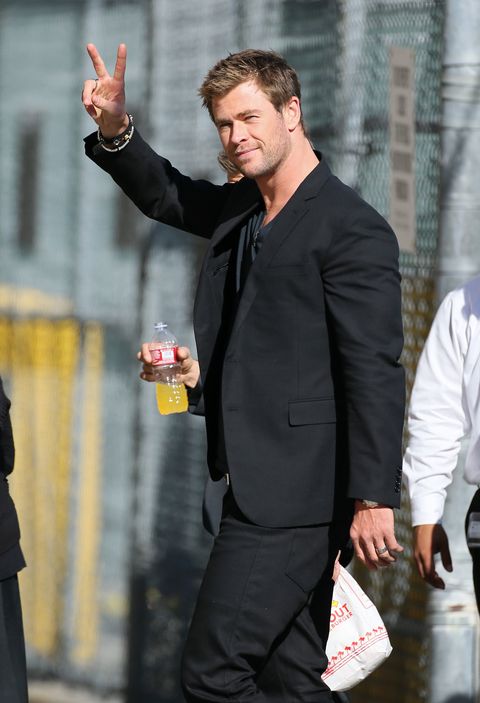 He may be one of Hollywood's hottest stars right now, but Chris Hemsworth was all too eager to get out of Los Angeles. The actor recently made the move back to his native Australia with his wife Elsa Pataky and their three young children in hopes of finding a bit of non-celebrity normalcy for his family.

Had a great time yesterday in Sydney for a special screening of #IntheHeartoftheSea benefiting @AusChild. This is an incredible cause that provides very specialized therapeutic counseling and care to help children recover from abuse and family violence. #NotAnotherChild

"I love what I do as an actor, but when you are surrounded by it constantly, it becomes a bit suffocating," Hemsworth explains in the latest issue of Modern Luxury. "It's nice to have conversations with people and be a part of a community that doesn't live and breathe that world."

"It's no longer all about me, which is quite refreshing," he adds. "Acting is the most self-absorbed world, where you are thinking about your feelings... You are constantly having to self-analyze or analyze a character you are playing, so you are internalizing and thinking, thinking, thinking about me... It's just a horrible, noisy conversation. Once the kids arrived, I was like, 'Wow, this is what life is about.'"

While Hemsworth neither regrets nor has any plans to abandon his acting career, life Down Under is proving to be a better speed for him and his brood right now.

The family who trains together, stays together!

"L.A. is a tough place to get around with kids," he admits. "There's not a whole lot of foot traffic. It was all about loading up the car and car seats… We were living shoulder to shoulder in the suburbs and thought that's not how we want our kids to grow up. Moving to a kind of farm setup back here on the coast in Australia has been the best thing… Here, we just walk out the door and head to the beach down the street. It's a much more simple life."

Just picture his three little blonde-haired, surfer kids catching waves and rays on the beach while mom and dad watch on, looking suntanned and gorgeous. It's not hard to see why they decided to return to Australia. In fact, we're kind of jealous we don't get to go too.

Sarah Lindig Senior Digital Editor, Special Projects Sarah Lindig is the senior digital editor, overseeing special projects for Harper's Bazaar.
Advertisement - Continue Reading Below
More From Celebrity
Lizzo Is a Vision in White at the Grammys
Why Taylor Swift Is a No-Show at the Grammys
Advertisement - Continue Reading Below
Is Lana Del Rey Dating a Hot Cop?
The World Mourns NBA Legend Kobe Bryant
Who is Maggie Rogers, the Grammy-Nominated Artist?
Alicia Keys' Biggest Fan Is Swizz Beats
Sel on Healing After Justin Emotionally Abused Her
Bey & Jay Were the Cutest at the Roc Nation Brunch
Prince William Just Got a New Royal Title
Chrissy Solved a Mystery With a Dolly Parton Post