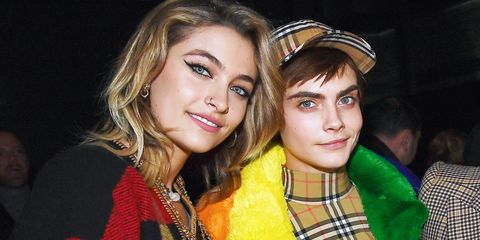 Paris Jackson and Cara Delevingne have started some serious dating rumors after being spotted kissing in public. However, apparently the pair are just friends right now. Or maybe they're dating. Who knows what the truth is?

According to People, "They have a flirty friendship but aren't dating or in a relationship. Paris is 19 years old and living her life. She has no plans to settle down any time soon."

Jackson also sparked dating rumors by sharing a photo of Delevingne on Instagram, along with an Instagram Story in which the pair were watching 2015 movie Carol, while snuggling in bed.

A source told Page Six that Delevingne and Jackson have bonded over their similar interests. The source said, "They’re both really into their music and have been spending nights singing and jamming on the guitar."

But as for whether they're in a relationship or not, reports are mixed. A source tells Page Six, "It’s early days, and Cara doesn’t really have time for a proper relationship due to her non-stop filming commitments... but there’s no denying there’s a spark."

However, People's report says that the two models are very much just friends. 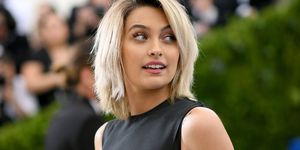 Amy Mackelden Amy Mackelden is a freelance writer, editor, and disability activist.
This content is created and maintained by a third party, and imported onto this page to help users provide their email addresses. You may be able to find more information about this and similar content at piano.io
Advertisement - Continue Reading Below
More From Celebrity
People Are Devastated by Britney's Revelations
Britney Spears on "Abusive" Conservatorship
Advertisement - Continue Reading Below
'Too Hot to Handle' S2 Was Filmed In Paradise
About That "Sexy Nerd" From 'Too Hot to Handle'
Prince Charles Is Leaving London When Harry Visits
What Happens on Katie's Season?
Meghan Wrote a Book When She was in Eighth Grade
Irina Pairs Her LBD With a White Shirt and Sandals
A-Rod Explained Why He Was Spotted With Ben's Ex
Selena Felt "So Less Than" in Past Relationships