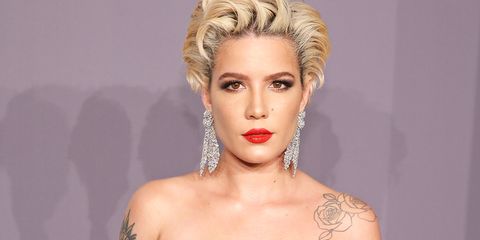 Breaking news: Halsey has armpit hair, and some troll isn't okay with it. Yes, it's 2018 and apparently people still can't accept that a woman dares to live her life the way she wants, which, in Halsey's case, is by not giving a damn.

On Friday, Halsey tweeted a couple photos of herself, because she can, looking fierce in a Fiorucci sports bra. But instead of focusing on her killer eyeliner, or #hairgoals bob, one Twitter user spent his time zooming in on one of the photos, where a patch of Halsey's armpit hair is just barely visible. And then, as all good trolls do, he proceeded to shame her for it.

The user (@Gtarri42) replied to the signer's selfies, writing, "What the hell is this?!!!" posting the same photo of Halsey but with an "LOL" sticker over her armpit.

In badass Halsey fashion, she quickly responded: "It’s an armpit you’ve put a sticker over. Not sure what else there is here to explain?"

It’s an armpit you’ve put a sticker over. Not sure what else there is here to explain? https://t.co/cLhMxVilyZ

Basically, Halsey doesn't give a fuck what anyone thinks of her body (at least in this case), and isn't about to apologize for being human. As one Halsey fan put it on Twitter: "Newsflash. Girls have hair. Girls do not have to shave to please your ass. Girls don’t have to shave at all. If we weren’t meant to have hair there, we wouldn’t have been born with it. Let go of the sexist shit that girls have to shave and men don’t k thanks."

Halsey should slap an "LOL" sticker over the profile of the attempted shamer, because nice try, dude.

Related Story
People Are Telling Cardi B to Shave Her Stomach
Alex Warner
This content is created and maintained by a third party, and imported onto this page to help users provide their email addresses. You may be able to find more information about this and similar content at piano.io
Advertisement - Continue Reading Below
More From Trending Beauty
I Tested Meghan Markle's Top Beauty Products
Glitter Pumpkin Butts Are a Thing for Halloween
Advertisement - Continue Reading Below
Behold: The Self-Tanner Fail to End All Fails
This Is Pinterest's #1 Halloween Makeup Idea
These 3 Products Cured This Woman's Acne
Princess Eugenie Just Dyed Her Hair Bright Red
13,000 People Swear By This Eye Cream
Post Malone Cut His Hair and Looks Unrecognizable
Shay Mitchell Will Only Use This One Concealer
People Are Freaking Out About Emma Stone's Hair