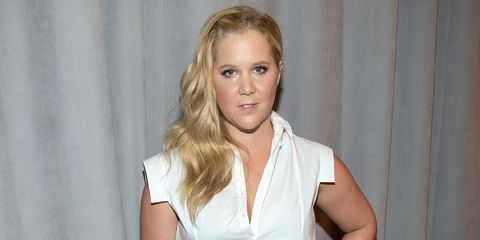 During a powerful conversation with Oprah Winfrey on SuperSoul Conversations, Amy Schumer opened up about her experiences with sexual assault. The incident, which Schumer explained she referred to as "gray-area rape" in her standup routine, was what most people would call intimate partner rape. The alleged perpetrator was Schumer's boyfriend at the time.

"I lost my virginity while I was asleep," she revealed in the interview, according to People. "So, in my stand-up, I used to talk about—I called it, 'gray-area rape,' which was my way of bringing this up in my stand-up…trying to make people laugh while they learned. When we hear about rape when we’re children, it’s about a guy popping out from a bush and this villain. They don’t say it’s probably going to be a guy who you know very well. It could be your husband, your friend. You think when that happens to you, you say, ‘Okay, well this isn’t someone I want to see rotting in a jail cell but what he did to me was wrong and I didn’t consent.'"

Schumer then recounted the conflicting feelings she had following the incident and feeling the need to comfort her then-boyfriend afterwards.

"I didn’t say anything [about consenting]. He was my boyfriend, I loved him, I had to comfort him,” Schumer said. "I also felt really angry which…it was just a feeling I had, I felt really angry with him. It’s a rage that’s stayed with me. I don’t think you lose that. As women, we’re trained not to get angry because that makes people dismiss you right away. But I felt—I wanted to comfort him and try to push my anger down."

While Schumer added that her then-boyfriend insisted after that he thought she knew they were going to have sex, she also described startling incidents of physical and emotional abuse that many women can relate to.

“I got hurt by accident a lot. He didn’t realize how hard he’d grabbed me or shook me or pushed me, and I would fall and hit something then I’d be hurt. I can picture being thrown on the hood of a car like it was an hour ago," she said. "And running from him, carrying my shoes and running from him, running into backyards trying to get away from him because I was afraid for my life. It’s so out of body. You think, ‘I’m not this woman, who is this woman? This can’t be me.’ I’m not that kind of woman, and then you realize there is no kind of woman. It happens to all woman."

Watch the entire powerful segment below:

This content is imported from YouTube. You may be able to find the same content in another format, or you may be able to find more information, at their web site.
Kayleigh Roberts Contributor Kayleigh Roberts is the weekend editor at Marie Claire, covering celebrity and entertainment news, from actual royals like Kate Middleton and Meghan Markle to Hollywood royalty, like Katie Holmes and Chrissy Teigen.
This content is created and maintained by a third party, and imported onto this page to help users provide their email addresses. You may be able to find more information about this and similar content at piano.io
Advertisement - Continue Reading Below
More From Celebrity
Twitter Blasts Media's Targeting of Duchess Meghan
Palace Is Looking Into Meghan Bullying Allegations
Advertisement - Continue Reading Below
Meghan & Eugenie Are Still Close After Royal Exit
Harry's Oprah Interview Suit Is a Nod to Archie
Ryan Seacrest's Relationship History, Explained
Angie Sells Painting from Brad for $11.5 Million
Meghan and Harry Blame the Palace for New Article
Serena Williams & Daughter Pose for First Campaign
Britney Spears Shares Rare Photo of Sons on IG
Kim Kardashian Fell Asleep Mid-Glam