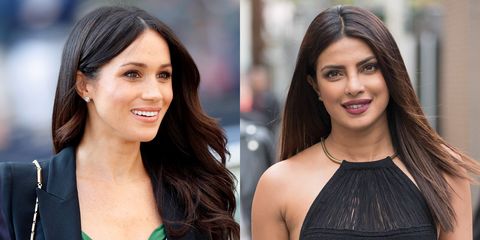 Priyanka Chopra has a lot to say about Meghan Markle's upcoming marriage to Prince Harry. The Quantico actress, who has been friends with Meghan for years, opened up about the couple during an interview on The Jenny McCarthy Show Wednesday. Chopra also confirmed that she will be in attendance for Meghan's and Prince Harry's May 19th nuptials.

"I've known Meghan for a few years now and I'm super happy for her, and I'm just really happy to be a part of her big day, ya know?" Priyanka said, according to E! Online, before adding that the former Suits actress was "born to be the wife of Prince Harry."

"I think she was born to be a global influencer and this has given her the opportunity to do that," Chopra replied. "She's always been someone who's so just aware and interested in the world. I met her three or four years ago and that's what we bonded on—was how much we feel like we contribute to that as public people. I really feel like that's what she was born to do and I hope this gives her the opportunity do that. "

When McCarthy brought up the "flak" that Meghan has gotten recently (likely in reference to members of her extended family speaking out about her negatively to the press), Chopra was quick to defend her longtime friend.

"Some people always talk crap," she said. "Haters gonna hate, potatoes gonna potate, roaches gonna rotate. Who cares? You do what you do!"