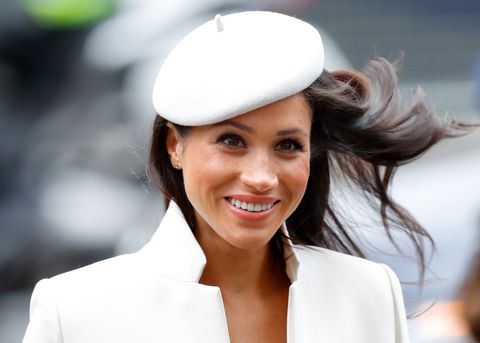 With just two weeks to go before the royal wedding, Kensington Palace just released new details about Meghan Markle's wedding party: The bride won't have a maid of honor. Despite speculation that she might choose one of her longtime friends, the palace announced that she'll just have bridesmaids who, according to royal tradition, will be children.

The reason? According to a royal reporter, Meghan couldn't choose from among her friends.

"The bridesmaids and page boys are all children. Ms Markle will not have a maid of honour. She has a very close group of friends and didn't want to choose one over the other," a spokesman for the couple said, according to the Daily Mail.

#royalwedding bridesmaids and pageboys will all be children and there will be no maid of honour. Meghan has a close group of adult girlfriends and couldn’t choose between them.

A problem many brides can sympathize with! (That whole 12 bridesmaid because you can't cut any of your friends thing might not fly at a royal wedding.)

The top guess for Meghan's maid of honor was Jessica Mulroney, her friend from Toronto (and one of the people who helped keep Meghan and Harry's relationship a secret) who's also helping to plan the wedding. Other women who were thought to be contenders: Serena Williams, Priyanka Chopra, or one of her Suits costars, Sarah Rafferty or Gina Torres.

Future sister-in-law Kate Middleton was never thought to be in the running for the job for the simple reason that she wouldn't want to take attention away from the bride on her big day. But that doesn't mean Meghan's future fam won't be involved: Princess Charlotte and Prince George are expected to be part of the wedding party, acting as a flower girl and page boy.

For her own royal wedding, the Duchess of Cambridge had her sister, Pippa Middleton, as her maid of honor. Pippa made headlines for how gorgeous she looked in her custom Alexander McQueen bridesmaids dress and the sweet moments she shared with her sister.

But just because they're not officially bridesmaids, it doesn't mean Meghan's friends aren't a part of the wedding. "They have been actively involved in helping her prepare for the day and will be there with her the day before in London," the couple's spokesman confirmed. "She will be pleased to have their support on the day but they have no official role."

And one of those friends who will be with her is Priyanka Chopra who just revealed she doesn't have a dress yet...

This content is imported from YouTube. You may be able to find the same content in another format, or you may be able to find more information, at their web site.
Sally Holmes Editor in Chief Sally is the Editor in Chief of Marie Claire where she oversees coverage of all the things the Marie Claire reader wants to know about, including politics, beauty, fashion, and celebs.
This content is created and maintained by a third party, and imported onto this page to help users provide their email addresses. You may be able to find more information about this and similar content at piano.io
Advertisement - Continue Reading Below
More From The Ultimate Guide to the Royal Family
Will and Kate Attend the ‘No Time to Die’ Premiere
Harry Carries Briefcase That Reads "Archie's Papa"
Advertisement - Continue Reading Below
Meghan Markle and Prince Harry Arrive in NYC
Princess Beatrice Has Given Birth to a Baby Girl
How Meghan & Harry Spent Their 2-Year Anniversary
Charlotte Has Two Major Milestones Coming Up
Kate Made a Very Common Shoe Shopping Mistake
The Queen Is Lawyering Up, Apparently
Harry & Meghan Are Still Close to the Queen, TYVM
Archie Inspired Harry and Meghan to Take a Stand