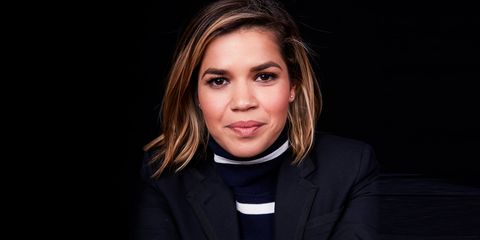 America Ferrera has been battling stereotypes for her entire life—which is why the Superstore actress was more than ready to help start #TimesUp this past fall, the movement working to end sexual harassment in the workplace and even the playing field between men and women in Hollywood (hello, wage gap).

As a Latina, Ferrera knows that while gender inequality impacts all women, women of color are hit particularly hard. (Latinas earn as low as 42 cents for every dollar paid to white, non-Hispanic men in certain states.) Of course, Hollywood is not innocent of this blatant sexism—minority actresses are often underpaid, and Latina actresses in particular are hyper-sexualized.

Ferrera has felt this discrimination—and stereotyping— acutely throughout her career as an actress.

At her first audition, the casting director asked her to sound “more Latina.”

“I grew up first and foremost American. I was very aware of the fact that I didn’t speak perfect Spanish. The girls who did speak Spanish made fun of me,” she says in a new interview with MAKERS, the feminist media brand on a quest to share the stories of trailblazing and gamechanging women. At her very first audition, the casting director asked her to sound “more Latina.”

“It became very clear, very quickly, that the industry looked at me and saw a brown person and that there was a specific box for that,” she says.

That audition may have been nearly two decades ago, but the movie biz hasn’t progressed much since. Latinos make up 18 percent of the U.S. population and is Hollywood’s most crucial audience (in 2016, Hispanics bought 18 percent of all movie tickets, a massive number in proportion to population), yet Latinos make up a minuscule fraction (just 6 percent) of movie and TV roles. The ones who do get a leading role are often slighted during awards season—not a single Latino actor or actress was nominated for any of the four acting categories during the 2018 Oscars.

Of course, these issues stem from larger, systemic problems in the country. As the daughter of immigrants, the 2016 presidential election hit Ferrera particularly hard: “Donald Trump announced his candidacy by calling Mexicans rapists and murderers, and talked about attacking women,” she says. “As a woman, as a Latina, and the daughter of immigrants, as an American, it did feel like, in a lot of ways, a death.”

Instead of accepting her fate as a Latina female in Hollywood and in America, Ferrera decided to fight back, co-founding Harness with her husband Ryan Piers Willaims and Wilmer Valderrama. The organization aims to unify grassroots leaders and influencers in the entertainment, business, and tech businesses to catalyze change in underrepresented communities. The organization gives a voice to minorities, immigrants, refugees, and people of color, turning “hashtags into action” via live events and forums.

Though there is certainly a lot of work to be done, Ferrera is optimistic about the future: “I gain strength and encouragement from those around me who are being courageous, and brave, and stepping out. I need them to keep doing that, because it’s what keeps me going.”

Related Stories
In Response to #MeToo, New Code of Conduct on Set
Maggie Gyllenhaal on the Nuances of #MeToo
Hollywood Men Launch #AskMoreofHim Campagin
Megan DiTrolio Editor, Features and Special Projects Megan DiTrolio is the editor of features and special projects at Marie Claire, where she oversees all career coverage and writes and edits stories on women’s issues, politics, cultural trends, and more.
This content is created and maintained by a third party, and imported onto this page to help users provide their email addresses. You may be able to find more information about this and similar content at piano.io
Advertisement - Continue Reading Below
More From Celebrity
Beyoncé Stuns in a Mesh Dress With Matching Gloves
Lizzo and Chris Evans Had the Best IG Interaction
Advertisement - Continue Reading Below
Travis Shared PDA-Heavy Bday Tribute to Kourtney
How the Queen Ends Awkwardly-Long Handshakes
The Queen Has a Rule Against Bad Talking Family
The Queen Took a Pic of Philip With Her to Funeral
The Queen's Tolerance Was the Key to Her Marriage
J.Lo "Likes" Shady IG Post After A-Rod Split 👀
Beyoncé Shares Photos of Her White Power Suit
Will & Kate Welcomed Harry Back Into Their Group