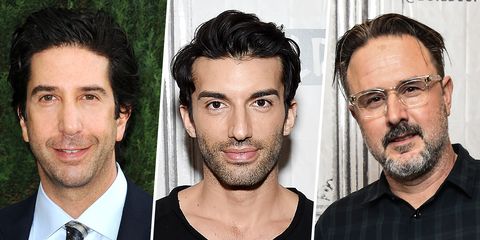 In the wake of the #MeToo and #TimesUp movements, over two dozen men in Hollywood have teamed up with anti-sexual harassment and sexual abuse activists to "express their support and solidarity" with women, launching a new campaign called#AskMoreofHim.

David Schwimmer, Justin Baldoni, David Arquette, and Matt McGorry are just a few of the actors who signed an open letter today pledging "to support survivors, condemn sexism wherever we see it and hold ourselves and others accountable."

The Representation Project, whose mission is to use "film and media as catalysts for cultural transformation," helped organize the campaign. And they've already chimed in on Twitter to share how proud they are to join the fight.

So proud to join the #AskMoreOfHim movement. As men there is no doubt we can do more. We can be better listeners, friends, supporters and allies. We aren’t perfect and we will never be but we can at least make an effort. This may be only a small step, but it’s an important one. https://t.co/vUwWOGeZUF

Proud to join #AskMoreOfHim at the #Oscars and every day. Because men can and must do more.https://t.co/XwFLpxSFWb

Proud to join #AskMoreOfHim at the #Oscars and every day. Because men can and must do more to stop violence against women in Hollywood and beyond. #TimesUp Learn more: https://t.co/Nottyu85NK

Read the full letter below, published by The Hollywood Reporter:

We applaud the courage and pledge our support to the courageous women—and men, and gender non-conforming individuals—who have come forward to recount their experiences of harassment, abuse and violence at the hands of men in our country. It is never easy for someone who’s been harassed or bullied to speak up, especially when the abuse is sexual. These people are our colleagues and friends. They are fellow artists and craftspeople. They are also our partners, siblings, parents and children. We are in awe of their strength and commitment to speaking truth to power.

But our awe is not enough. As men, we have a special responsibility to prevent abuse from happening in the first place. After all, the vast majority of sexual harassment, abuse and violence is perpetrated by men, whether in Hollywood or not. And in entertainment—like many industries—men continue to hold most of the decision-making power. Therefore, one of the most powerful things that men can and must do is make it clear to other men — including their friends, colleagues and co-workers — that sexual harassment and abuse are never acceptable. This goes for everything from sexist and degrading comments, right up to domestic violence and sexual assault.

Some may question our motives for signing this statement and we aim to counteract their skepticism by being painfully honest. Men are imperfect. We are imperfect. And many men, including perhaps some of us, may have enabled the bad behavior of others or acted in ways we now regret. Nonetheless, we believe that men must speak out against sexism, even as we engage in our own process of critical self-reflection, personal growth and accountability.

So consider this our pledge to support survivors, condemn sexism wherever we see it and hold ourselves and others accountable. As advocates, actors, writers, producers, and directors, we hope that our actions will inspire other men to join us. Until now, only a small number of them have been actively engaged in this effort. This must change. It’s time we #AskMoreOfHim.

Below is the full list of men who have signed the letter—so far.

Related Story
What Is the #MeToo Movement
This content is created and maintained by a third party, and imported onto this page to help users provide their email addresses. You may be able to find more information about this and similar content at piano.io
Advertisement - Continue Reading Below
More From Culture
What Makes an Olympic Moment?
Team USA Fencers Protested Their Teammate
Advertisement - Continue Reading Below
Hang On, What's "ROC" at the Olympics?
Suni Lee Just Scooped Up Gold in Tokyo
Movies Everybody Should Watch At Least Once
'Virgin River' Season 4: Everything We Know
'Love Is Blind' Season 2 Is Coming!
Simone Biles' Sister Is Her Fiercest Champion
Simone Biles Quotes to Live By
Could 'Manifest' Come Back for a Fourth Season?