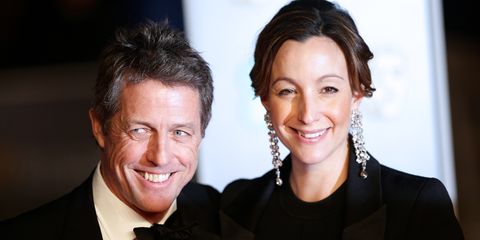 Hugh Grant is officially a married man. The 57-year-old actor tied the knot for the first time when he wed Swedish television producer Anna Eberstein in London on Friday. The couple went very low-key with their wedding, making things official at the Chelsea Register Office.

The wedding comes just days after Grant and Eberstein announced that they were engaged. The couple welcomed their third child, Grant's fifth, in March of this year.

Grant's ex, Elizabeth Hurley, with whom he has stayed close, revealed that he and Eberstein had welcomed their newest addition during a recent appearance on Watch What Happens Live With Andy Cohen.

"He had another one last week. He has five," she said. "He was over 50 when he spawned them all! He's an enchanting dad—really, really sweet. Having these kids has transformed him from a very miserable person into a fairly miserable person. It's improved him. He's gone up the scale."

Grant and Eberstein welcomed their first child, John Mungo Grant, in September 2012. After a brief split, they reconciled and welcomed their second child together, a daughter whose name has not yet been publicly revealed, in December 2015.

"It's made me much nicer," Grant told Us Weekly in 2015 of becoming a father. At the time, he also told the publication that he didn't see himself getting married in the future.

"Well maybe baby," he said of the possibility of tying the knot, "but I doubt it!"

Kayleigh Roberts Contributor Kayleigh Roberts is the weekend editor at Marie Claire, covering celebrity and entertainment news, from actual royals like Kate Middleton and Meghan Markle to Hollywood royalty, like Katie Holmes and Chrissy Teigen.
This content is created and maintained by a third party, and imported onto this page to help users provide their email addresses. You may be able to find more information about this and similar content at piano.io
Advertisement - Continue Reading Below
More From Celebrity
Meet Simone Biles's Super Supportive Parents
What Happens on Katie's Season?
Advertisement - Continue Reading Below
Bennifer Recreated Their 2002 PDA Moment
Why Harry's Memoir Release Date Has Upset People
The Royals Are Worried About Prince Harry's Memoir
Gabrielle Union Debuted a New, Short Haircut
J.Lo Made Out With Ben on IG for Her 52nd Birthday
Harry Is Putting the Queen in a Difficult Position
Are Will & Kate Sending a Message to Harry & Meg?
Harry and Meghan Reportedly Have a Four-Book Deal