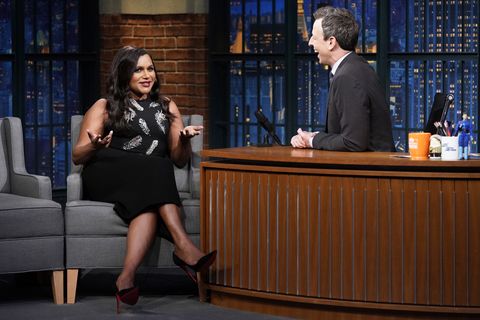 Kaling was in a joint interview with costars Anne Hathaway and Sarah Paulson when she encountered a head-scratchingly sexist (/just plain clueless) question. She described the awkward encounter during an interview on Late Night with Seth Meyers.

"When you’re doing these heist movies, everyone has their special power, which is why Debbie Ocean pulls us together to do this heist," Kaling explained. "In the movie, Anne plays an actress and Sarah plays a party promoter. With me, the male reporter was like, ‘Mindy, you play a jeweler. Now, you’re not married and you’ve never been engaged, so how do you know about diamonds?'"

Meyers rightly pointed out that, you know, that's not how acting works. After all, none of the women in the movie have ever pulled off a heist in real life and, yet, they were cast to pretend to do just that on camera.

See incredible single woman Mindy Kaling fake her way through knowing what a diamond is for yourself when Ocean's 8 is released on June 8.

Kayleigh Roberts Contributor Kayleigh Roberts is the weekend editor at Marie Claire, covering celebrity and entertainment news, from actual royals like Kate Middleton and Meghan Markle to Hollywood royalty, like Katie Holmes and Chrissy Teigen.
This content is created and maintained by a third party, and imported onto this page to help users provide their email addresses. You may be able to find more information about this and similar content at piano.io
Advertisement - Continue Reading Below
More From Celebrity
Kate & William Are "Besotted" with Their New Puppy
J.Lo Re-creates "Love Don't Cost a Thing" Video
Advertisement - Continue Reading Below
Meghan Markle Made Prince Harry a Better Man
See a Rare Portrait of Princess Diana's Mother
Kelly Ripa's Husband Left Her a NSFW Comment
Jennifer Lopez on Learning to Love Herself
Diana's Wedding Interview Footage Is Telling
The Queen May Honor Kate Later This Year
Olivia Wilde & Harry Styles Keep It Profesh on Set
Prince Harry on How Tabloid Attacks Changed Him