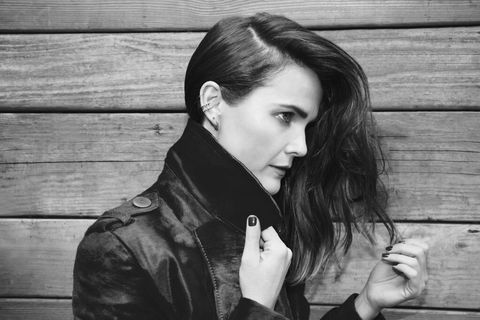 Spoilers for Wednesday's already-aired series finale of The Americans lie below. If you haven't watched it yet, proceed with caution. You've been warned, comrades.

After six years and 75 episodes, The Americans has wrapped its final chapter. Ever. This past season has been a tour de force of acting and pitch-perfect narrative arcs—cementing The Americans as one of the most important prestige television shows of our generation. And it all comes down to two people: real-life couple Keri Russell (Elizabeth Jennings) and Matthew Rhys (Philip Jennings).

"I don't know how you recover from what happened to them. It's so devastating."

The Americans is as much a portrait of Phil and Elizabeth's marriage as it is a badass KGB spy thriller, and throughout the series, we've seen the couple struggle to rationalize their relationship with their work. In season six, Phil and Elizabeth were more estranged than ever: She continued to be obsessively focused on the Motherland, while he continued trying (and failing) to capture the American dream.

Six years of tension came to a tragic head in Wednesday's final episode, when FBI agent Stan Beeman discovered Phil and Elizabeth's true identities, forcing them to leave their children and flee to Russia. The final shot of the show is full of hope and devastation: Phil and Elizabeth gaze in wonder at their homeland—the place they've sacrificed everything for—which, it turns out, isn't really home after all.

In addition to the tears and general feeling of disorientation ("welp, now what do I watch?") that comes with the end of a beloved show, The Americans' finale left viewers desperate for more information. What will Phil and Elizabeth do now? Will they ever see their kids again? And, most importantly, is this truly the last we'll see of these characters? MarieClaire.com hopped on the phone with Keri Russell for some answers.

On the One Wish She Had for the Show's Ending:

"I have to say, with every script I read to the very end, I was always consistently surprised. You know what I mean? I was never like, 'Oh yeah, that's happening.' The writers always surprised me in this devastating way. I guess the only thing I wanted for the end was the continuation of this marriage. I just wanted that to be the most important thing. And I feel like it was. Aside from all the spy work, and all the politics, I wanted them to be together."

On Her Predictions for Phil and Elizabeth's Future:

"We all know the Iron Curtain falls, and the Berlin Wall falls, and Communism doesn't win—it just takes a few short years. So I hope they go back and find their kids. That's what I hope. That they try to rebuild what has been broken. That's the only saving grace in this most devastating story. But I don't know what life is like for them during those two years in Russia. I don't know how you recover from what happened to them. It's so devastating."

On the Real Meaning Behind Elizabeth's Decision to Betray The Center:

"When we make a decision in our lives, it's affected by so many factors. And some days, more factors are true than others. I would say Elizabeth's decision was really her coming into her own thinking, and freeing herself from the group that she was so involved with. And a break away from them is a deeper connection to Philip, because they're on their own. As much as Elizabeth toed the line, I really believe that incrementally and slowly, inch-by-inch, over the years they were separating from The Center by getting married on their own and by telling secrets to each other that they weren't supposed to tell. I think the writers did that very nicely."

On Filming Phil and Elizabeth's Insanely-Anticipated Confrontation with Stan:

"We shot it all in one day inside this crazy garage. I don't say much in the scene, so I was just listening. It's really Noah [Emmerich, who plays Stan Beeman] and Matthew who did the heavy lifting. They were incredible. I have to say, after six years of doing a show—I don't care how much you like it—you get lazy. We'll be like, 'Oh, what are those lines?' But they came in and they knew every single world, already memorized. They didn't have to look at anything. They just nailed it. Noah's back was out that day, he had this crazy pain where he could barely stand up. He had to stand on the cement doing that one scene for about nine hours. But they just nailed it. It was the whole series coming to this crazy end, and it was really cool to watch them work."

"To be a woman and get that part when usually a man gets the more interesting one...it was such a gift."

"The subject matter is so heavy—we're murdering people, daughters are calling their mothers whores—but I think that's why we keep the set so light. First of all, Matthew is so funny. And because we're freezing and shooting outside at night, you just have to laugh. The crew is so great, they're always making fun of us."

On Elizabeth Entering Such a Dark Place This Season:

"I really enjoyed it. It was this completely full character arc that I had the privilege of getting to be a part of. It was such a cool story, and to be a woman and get that part when usually a man gets the more interesting one...it was such a gift. I loved doing it. Yes, it was depressing and I looked really bad the whole time. But I relished it. It felt like a real full circle of a character—which, as we all know, isn't always the case in today's world with ladies always having to look perfect and act perfect. I feel like I got to experience getting to be a true character with many flaws. It was fucking awesome."

On Whether She'd Ever (You Guessed It) Do a Spin-Off:

"Interesting. I don't know! Of course it's so sad to see the show end, but I also think it's the right time, to get out while it's still good. I'm still totally tantalized by the scripts and stories, so I felt like this was the right time. But yeah, I love that character, I'd love to see Elizabeth somewhere else."