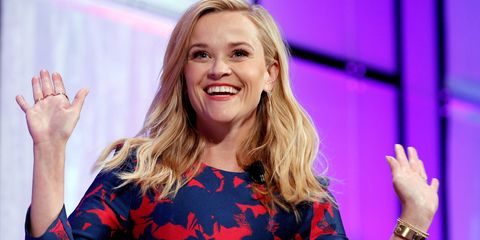 Your Monday is about to get a whole hell of a lot better: Reese Witherspoon is officially in talks about Legally Blonde 3.

According to Variety, it’s rumored that Witherspoon will produce the threequel through her production company Hello Sunshine, alongside Legally Blonde’s original producers Marc Platt and Adam Siegel. And in the spirit of keeping the film’s creative team together, MGM has enlisted screenwriters Kirsten “Kiwi” Smith and Karen McCullah (the masterminds who adapted Amanda Brown’s novel way back in 2001).

It’s been almost 15 years since we last saw Elle Woods as the animal rights activist-turned-politician in Legally Blonde 2, and although the sequel wasn’t quite as successful as the original (it grossed just $124.9 million compared to the first film's $141.8 million), there’s no denying that Witherspoon’s character has earned cult status (remember the student who wrote her 15,000-word dissertation on Legally Blonde?).

This isn't the first time Witherspoon has teased us with Legally Blonde 3 rumors—in 2015, the actress revealed on Fashionably Late with Rachel Zoe that she was already thinking about Elle Woods' future. "I think it'd be cool to have [Elle] be Supreme Court Justice, or someone who runs for office. President," she said.

We certainly have a lot of questions about the threequel (are Elle and Emmett going strong?! Is Bruiser still around?!), and will be waiting with bated breath for Witherspoon to confirm the news herself.

Ruby Buddemeyer Ruby was the beauty editor at Cosmopolitan, where she covered beauty across print and digital.
This content is created and maintained by a third party, and imported onto this page to help users provide their email addresses. You may be able to find more information about this and similar content at piano.io
Advertisement - Continue Reading Below
More From Celebrity
Alicia Silverstone Got Banned From a Dating App
The Queen Just "Reluctantly" Canceled a Trip
Advertisement - Continue Reading Below
Adele's Album Will Feature a Sensitive Voicemail
Selena Gomez Just Debuted a Sleek Bob
Zendaya Looked Incredible at the 'Dune' Premiere
Kate Middleton Is Helping Tackle Addiction
The Queen Was Advised to Stop Drinking for Now
Scott Disick Is "Not Happy" for Kourt and Travis
Emma Watson Stunned at the Earthshot Prize
Kate "Didn't Have Much Energy to Bond" With Meghan