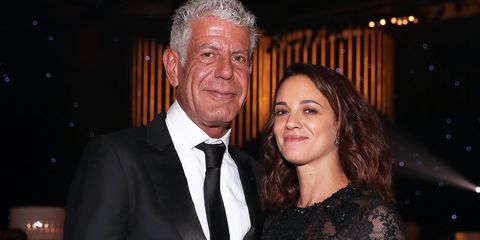 Anthony Bourdain, who who died by suicide while in France for an upcoming episode of his CNN show Parts Unknown, lived a thousand lives in his too-short 61 years. He was a chef, getting his start at famed NYC brasserie Les Halles—an experience which partially inspired his infamous 2000 book, Kitchen Confidential: Adventures in the Culinary Underbelly. He was a beloved TV host, gaining a following for his “bad boy chef” image after the premiere of his Travel Channel show, No Reservations, and building it further on CNN. And most recently, he was one of the rare men who remained vocally in support of the #MeToo movement.

Part of what drew people to Bourdain's shows was his persona, which, beyond any notions of coolness or culinary mastery, was incredibly empathetic. He took viewers further afield than other travel show hosts, showing the humanity and joy of spaces while never shying away from the unseemly or dark.

Bourdain's championing of women’s voices was inspired by his relationship with girlfriend Asia Argento, an Italian actress and one of Harvey Weinstein’s early accusers. "I’d like to say that I was only enlightened in some way or I’m an activist or virtuous, but in fact, I have to be honest with myself," he told Trevor Noah in January. "I met one extraordinary woman with an extraordinary and painful story, who introduced me to a lot of other women with extraordinary stories and suddenly it was personal."

"What did I see and what did I let slide? What did I not notice?"

Many purported male allies stayed alarmingly silent at the height of the #MeToo and #TimesUp movements, citing the belief that it was not their turn to speak or that they didn’t want to look performative in their support. Typically, these responses smacked of fear: That the men in question would be “next” and their support would then look hypocritical, or that they would be accused of somehow bolstering predators in the past.

The nature of Anthony Bourdain’s support was different. He was cognizant of the ways that being a vocal champion could look self-serving, so he amplified women without jumping in front of them. He showed rare insight into the thought process many men experienced as the #MeToo allegations poured in. “I look back, like hopefully a lot of men in that [restaurant] industry and think, not necessarily What did I do or not do?, but What did I see and what did I let slide? What did I not notice?”

In an interview with CNN, he went further: “To stay silent has a real cost. You will be called to account for that. You will be asked what you did when you saw this.”

He told Noah that the movement made him reexamine his own life—particularly the ways in which he’d glorified the “boys’ club” reputation of the restaurant industry, perhaps to the detriment of women he worked with. “I knew a lot of women, it turned out, who had stories about their experiences—about people I knew—who did not feel I was the sort of person they could confide in.”

He later got into a very public Twitter tussle with Alec Baldwin after the latter made victim-blaming comments about Weinstein and Rose McGowan and went after Asia Argento via tweet. “Just shut up,” he finally told Baldwin.

Anthony Bourdain was brave in his work as a male ally, speaking out against rape culture at a time when many other men hesitated or balked. That he may have been silently suffering during that time is a tragedy, as was his choice to end his life.

But an important way many men could honor his legacy would be to continue telling the stories that he fought to amplify, to believe women, and to help ensure that the lessons of the #MeToo movement aren’t forgotten.

This content is created and maintained by a third party, and imported onto this page to help users provide their email addresses. You may be able to find more information about this and similar content at piano.io
Advertisement - Continue Reading Below
More From Celebrity
Rihanna and A$AP Were Spotted on a Date
Prince Harry Is "Really Missing" Meghan Markle
Advertisement - Continue Reading Below
J.Lo and A-Rod Are "Completely Back On"
Chrissy Shared the Cutest Photo of Luna and Miles
Gaga Stuns in a Wedding Dress for 'House of Gucci'
Prince Harry Is Quarantining at Frogmore Cottage
Meghan Markle Expresses Sympathies to the Queen
Prince Harry Remembers Prince Philip
Prince William Statement on Prince Philip's Death
Meghan and Harry Are Facing Security Threats