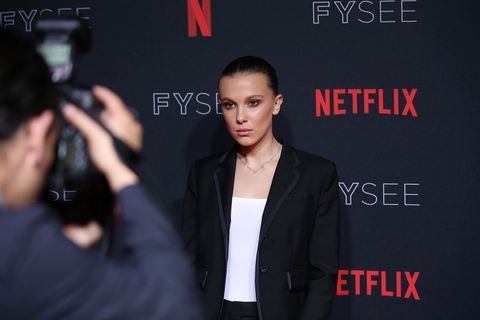 It’s all fun and games until a 14-year-old child star is chased from the internet because she’s been turned into an "anti-gay meme." Stranger Things star Millie Bobby Brown has deactivated her Twitter account after unwittingly becoming the subject of a homophobic meme.

Which is probably all the proof you need that you probably shouldn’t have come online this morning.

The meme shows various images of Millie beside homophobic comments and anti-gay slurs, often presented in captions designed to look as though the actress actually made the comments herself (she did not, obviously).

If you’re wondering how and why this ever came to be a good idea: The meme is intended to be ironic, bearing in mind Millie’s track record of proudly supporting LGBTQ+ rights. At last year’s MTV Awards she wore a pin to show her solidarity with GLAAD, and she has also created Twitter handle @Milliestopshate to fight bullying and spread positivity.

You can also add to that: The Kids’ Choice Awards jean jacket featuring the names of the 17 victims of the Parkland shooting; and the speech in which Millie encouraged her young audience to “make a positive difference and help influence change.”

Let’s maybe not include actual children in NSFW offensive humor next time, hmm?

Lucy Wood Contributor, MarieClaire.com Lucy Wood spends most of her time writing about celebby things, reading books, and waiting for the glorious day that she have enough millions for a pet sloth.
This content is created and maintained by a third party, and imported onto this page to help users provide their email addresses. You may be able to find more information about this and similar content at piano.io
Advertisement - Continue Reading Below
More From Celebrity
Royal Family Shares Rare Photo of Prince Philip
Chloe From 'Too Hot to Handle' Is in 'The Circle'
Advertisement - Continue Reading Below
There's Drama Over Prince Harry's Funeral Attire
Jennifer's Rep Breaks Silence on Adoption Story
Princess Eugenie's Prince Philip Tribute
Serena Williams Signed a Major TV Deal With Amazon
Chrissy Wrote Luna the Sweetest Birthday Message
Prince Harry Has Met Princess Eugenie's Son August
The Queen Returns to Work After Philip's Death
A Brief History Lesson on Brad and Jen