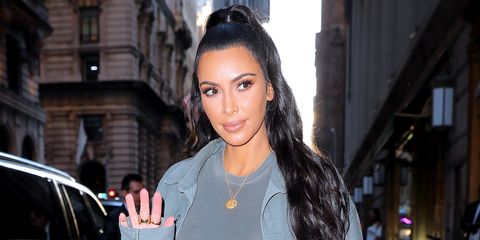 But also, don't take that as a firm yes.

In an interview on CNN’s The Van Jones Show released Friday, the reality star-turned-business mogul opened up about the possibility of seeing her name on a political ticket in the future. "Oh, I don’t think that’s even on my mind," she said.

“I guess never say never. But that’s not going to be like, Kim’s running. That’s not where I am,” she says https://t.co/2VVNf9PLoQ pic.twitter.com/eeKiDX6Xdr

Last month, Kardashian West met with Donald Trump at the White House to advocate for the release of Alice Marie Johnson. The meeting was a success, with Trump pardoning Johnson about a week later. The star's recent political activism is likely at the heart of murmurs that she might one day run for office herself.

This isn't the first time Kardashian West has discussed political aspirations. In 2012, she famously talked about her desire to run for mayor of Glendale, California in a clip from Khloé & Lamar.

"I decided ... I'm gonna run for the mayor of Glendale. You have to have full residency in Glendale, so Noelle's going to head my campaign, but it's going to be five years for Glendale. So I have to buy a house there," she said at the time. "You have to have residency, so Noelle and I are looking into all the requirements. It's [an] Armenian town. But I need to wait like five years."