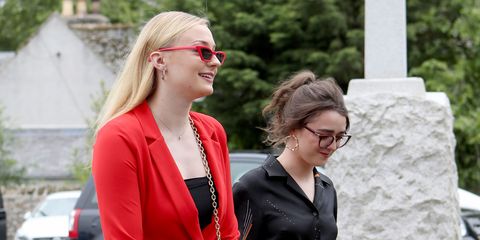 Kit Harington and Rose Lelsie tied the knot this weekend in Scotland in a beautiful ceremony attended by family, friends, and, of course, some of their Game of Thrones costars. Harington's fictional kind-of-sort-of half-sisters (because, you know, Jon Snow's family tree is a whole thing) were among the guests.

Sophie Turner and Maisie Williams, who play Sansa and Arya Stark on the HBO hit, attended the wedding as each other's wedding dates.

Understandably, she was on guard against potential wardrobe malfunctions ahead of the ceremony.

Turner's fiancé, Joe Jonas, does not appear to have been able to make it, but the actress was photographed FaceTiming with him at the Aberdeen airport on Friday when she landed for the wedding.

Turner and Maisie weren't the only members of the Game of Thrones cast to turn out for the wedding. Emilia Clarke, who plays Harington's aunt/current love interest, Daenerys Targaryen, and Peter Dinklage, who plays fan favorite Tyrion Lannister, were also spotted flying into the Aberdeen airport on Friday ahead of the wedding.

Harington has been clear for a while now that he planned to have as many of his costars as possible at the wedding.

"I rang [the Game of Thrones producer] up and I said, 'I’m getting married and it’s your fault actually'... I think for the final season he is so stressed that he’s reached that peaceful level," he said during an October 2017 interview. "I was like, 'You need to factor in a Game of Thrones wedding by the way.' They [the cast] have all got to be there so the whole thing has got to shut down."

Kayleigh Roberts Contributor Kayleigh Roberts is the weekend editor at Marie Claire, covering celebrity and entertainment news, from actual royals like Kate Middleton and Meghan Markle to Hollywood royalty, like Katie Holmes and Chrissy Teigen.
This content is created and maintained by a third party, and imported onto this page to help users provide their email addresses. You may be able to find more information about this and similar content at piano.io
Advertisement - Continue Reading Below
More From Celebrity
Alicia Silverstone Got Banned From a Dating App
The Queen Just "Reluctantly" Canceled a Trip
Advertisement - Continue Reading Below
Adele's Album Will Feature a Sensitive Voicemail
Selena Gomez Just Debuted a Sleek Bob
Zendaya Looked Incredible at the 'Dune' Premiere
Kate Middleton Is Helping Tackle Addiction
The Queen Was Advised to Stop Drinking for Now
Scott Disick Is "Not Happy" for Kourt and Travis
Emma Watson Stunned at the Earthshot Prize
Kate "Didn't Have Much Energy to Bond" With Meghan