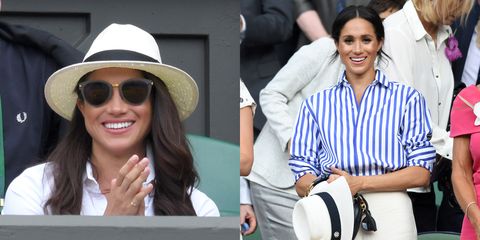 Today in Rules the Royal Family Has to Follow: Meghan Markle was not allowed to wear her Wimbledon hat at Wimbledon this year.

Here she is at Wimbledon in 2016, just before she was set up with Prince Harry, wearing an adorable white hate with a black ribbon:

And here she is, two years and a royal wedding later, at Wimbledon with her sister-in-law, Kate Middleton, on Saturday:

Meghan was photographed pretty much constantly during her outing at Wimbledon, but never once with her beloved Wimbledon hat (because it does appear to be the same exact hat she wore two years ago) on her head, in spite of the blazing sun and searing heat.

So why wasn't Meghan allowed to wear the hat she brought with her to Wimbledon? Clearly, it's not a Wimbledon rule, since she wore it two years ago. The difference is that this year, Meghan watched the match from the Royal Box, where different rules apply.

According to The Sun, spectators in the Royal Box are expected to dress "smartly," meaning that men are encouraged to wear a jacket and tie. Guests in the Royal Box are also prohibited from wearing hats because it could block the view of others around them. Since Meghan watched like a (relative) normal last time she went to Wimbledon, she was allowed to wear her adorable white hat.

Even though she couldn't wear the accessory, it was clearly important to Meghan to have the hat with her at Wimbledon, keeping her personal tradition alive.

Kayleigh Roberts Contributor Kayleigh Roberts is the weekend editor at Marie Claire, covering celebrity and entertainment news, from actual royals like Kate Middleton and Meghan Markle to Hollywood royalty, like Katie Holmes and Chrissy Teigen.
This content is created and maintained by a third party, and imported onto this page to help users provide their email addresses. You may be able to find more information about this and similar content at piano.io
Advertisement - Continue Reading Below
More From The Ultimate Guide to the Royal Family
Will Asked His Uncle to Talk to Harry About Meghan
Why the Queen Denied Meghan's Wedding Tiara Pick
Advertisement - Continue Reading Below
Will & Harry's Reactions to Their Parents' Divorce
Harry & Meghan's Drama Won't Be on 'The Crown'
Will's Talk with Charles That Led Him to Kate
The Queen Saved Will from a Breakdown as a Teen
Prince Philip Has "Walked Away" From Prince Harry
Jessica Mulroney Slams Fake Friends on Instagram
Princess Charlene of Monaco's Top Looks
Diana's Note About Her BBC Interview Is Missing