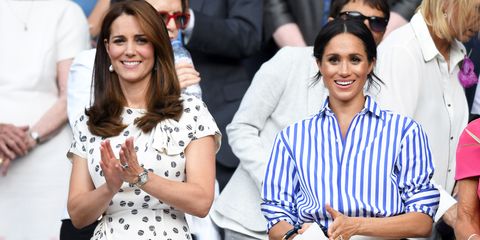 In their first-ever solo outing, Meghan Markle and Kate Middleton are watching the women's singles final at Wimbledon right now. The duo—who attended RAF Centenary earlier this week with Prince Harry and Prince William—are talking and laughing like longtime best friends while cheering on Serena Williams (a close friend of Meghan's) from the stands at Wimbledon.

Williams hinted in a recent interview that her old friend Meghan might come to watch her "if I keep winning." Since Kate is a patron of Wimbledon, this made perfect sense for the pair's first solo event together.

After simultaneously killing the fashion game at Prince Louis' christening last week, it's no surprise that the Duchesses arrived at the match looking perfect. Kate—who opted for a simple and chic white dress with black polka dots stood alongside Meghan, who arrived in a blue and white striped blouse and white culottes.

Today marks the Duchess of Cambridge's first Wimbledon match of the year—since giving birth to Prince Louis in April, Kate has kept her public outings to a minimum (save for big events like Prince Harry and Meghan's wedding, and later, Trooping the Colour). Although she will reportedly attend tomorrow's match with Prince William, there's something extra iconic about the sister-in-law's alone time.

Based on their body language and facial expressions, we'd guess these two had been best friends for years. The look on Meghan's face says it all.

Getty Images
Getty Images
Related Story
Meghan and Kate Look Elegant for RAF Centenary
This content is created and maintained by a third party, and imported onto this page to help users provide their email addresses. You may be able to find more information about this and similar content at piano.io
Advertisement - Continue Reading Below
More From The Ultimate Guide to the Royal Family
Harry Is Putting the Queen in a Difficult Position
Are Will & Kate Sending a Message to Harry & Meg?
Advertisement - Continue Reading Below
Harry and Meghan Reportedly Have a Four-Book Deal
Rare Photos From Diana and Charles' Wedding
Prince George Looks So Grown-Up in New Portrait
Whatever Happened to Archewell Audio?
Prince Harry Is Set to Publish a Memoir
For Prince George Turning 8 Is a Fashion Milestone
Queen & Philip Made a Pact Not to Mourn Too Long
Diana Was Traumatized by Something Charles Said