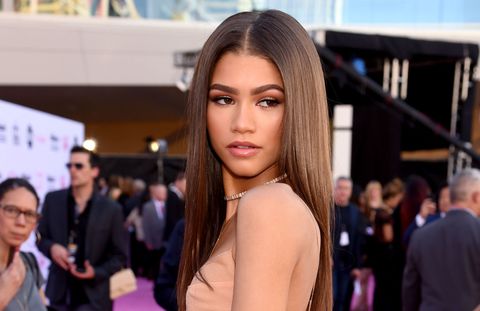 When news broke that Zendaya would likely be playing Mary Jane Watson in Spider-Man: Homecoming, we were ecstatic. She's talented, gorgeous, and spunky as hell—aka a PERFECT Mary Jane.

But there were some people on the great wide web who weren't as excited about the announcement. Casting announcements for beloved properties, especially ones that dare to push the envelope about preconceived notions about what a character "should" look like, tend to bring out the trolls and Zendaya's Spider-Man news was no exception. Instead of being excited about what a woman of color could bring to the role, trolls went on the offensive, decrying the casting choice.

One Marvel heavyweight is stepping up in a big way to defend Zendaya's casting though: Director James Gunn, who brought the hilariously wonderful Guardians of the Galaxy to the screen.

Gunn took to both Twitter and Facebook to support Zendaya. In a lengthy Facebook post, he explained exactly why Zendaya is the right woman to fill MJ's shoes, and we have to say we agree with him.

"For me, if a character's primary attribute—the thing that makes them iconic—is the color of their skin, or their hair color, frankly, that character is shallow and sucks. For me, what makes MJ MJ is her alpha-female playfulness, and if the actress captures that, then she'll work," he wrote. "And, for the record, I think Zendaya even matches what I think of as MJ's primary physical characteristics—she's a tall, thin model—much more so than actresses have in the past."

As great as that point is, Gunn made an even better one later in his post, noting that, while most of the comic book characters we love were created during a time when a lack of diversity was the norm, bringing them into modern day requires some changes and those should be celebrated, not rallied against.

"Whatever the case, if we're going to continue to make movies based on the almost all white heroes and supporting characters from the comics of the last century, we're going to have to get used to them being more reflective of our diverse present world," Gunn wrote. "Perhaps we can be open to the idea that, although someone may not initially match how we personally conceive a character, we can be—and often are—happily surprised."

Kayleigh Roberts Kayleigh Roberts is the weekend editor at Marie Claire, covering celebrity and entertainment news, from actual royals like Kate Middleton and Meghan Markle to Hollywood royalty, like Katie Holmes and Chrissy Teigen.
This content is created and maintained by a third party, and imported onto this page to help users provide their email addresses. You may be able to find more information about this and similar content at piano.io
Advertisement - Continue Reading Below
More From Celebrity
Prince Harry on How Tabloid Attacks Changed Him
Watch Orlando and Katy After Her Performance
Advertisement - Continue Reading Below
Kate Middleton Debuted Long, Straight Hair
Prince Harry's Surprise Inauguration Appearance
Chrissy Teigen Shared a Cute Tom Hanks Story
Gigi and Zayn Finally Reveal Their Daughter's Name
Rihanna Takes Out the Trash on Trump's Last Day
Chrissy Teigen Shared a Moving Post About Sobriety
Meghan's Royal Aides to Testify in Her Court Case
Greta Thunberg Hilariously Trolled Trump—Again