The Beyhive is currently WILD with the whispers of baby number four: Beyoncé held her hand against her belly on stage in a *~suggestive manner~* during an On The Run II Tour performance this week. Add to that a couple of potentially cryptic Instagram posts, plus a bump that could possibly be a baby or a good meal, and you’ve basically got sheer chaos unfolding on the internet.

At this point in life, a potential Beyoncé pregnancy is infinitely more exciting than a confirmed friends-and-loved-ones pregnancy, isn’t it? Log onto Facebook at any given time and you’ll see around five of your truly awful classmates who used to eat their own pencils announce that they’re expecting, but Beyoncé? Beyoncé plays it so much cooler. Beyoncé keeps an air of mystery, throws around subtle hints, drives us all to the brink of madness, and then unveils a veiled, heir-bearing stomach against a floral backdrop to leave us weeping at the miracle of life.

In a video captured by fans at the end of a performance of "Bonnie & Clyde," Bey seems to almost-cradle her belly in a similar way to her first pregnancy reveal in 2011. At the MTV Video Music Awards back then, she finished belting out "Love On Top," before pulling apart a sequined jacket to rub a prominent preggers stomach. See for yourself in the video below.

Head over to her Instagram page and you’ll also see the 36-year-old star casually posing against a wall with the number 4 emblazoned across it, while conveniently hiding her stomach with a carefully placed arm. Clutching at straws? Maybe, but you’ve got to take what you can get.

The number 4 has always been a precious number for the Carters. Bey and Jay were both born on the fourth day of September and December respectively, they married on 4 April 2008 (4/4), Beyonce’s fourth album was called 4, and Jay-Z’s 2017 album was called 4:44. Of course, they're already parents to daughter Blue Ivy, 6, and twins Rumi and Sir, a year old.

Batten down the hatches, people. A new Carter-Knowles heir is (maybe) incoming. 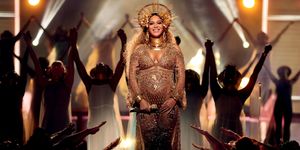