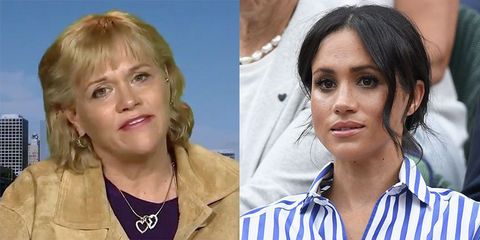 Speaking in a new live interview with Good Morning Britain, Meghan Markle’s half-sister Samantha Markle has refused to deny the rumors that she’s set to appear on the upcoming series of Celebrity Big Brother UK. The no-holds-barred chat also saw Samantha discuss her turbulent relationship with the Duchess, and openly admit to "cashing in" on her sibling’s new place in the royal family.

When quizzed as to whether she really will be making an appearance on the reality show, the author coyly responded: “We can enjoy the process. I don't think there's anything wrong with that. It's not disparaging, it's not harmful." Clearly squirming when pressed for a more definite answer, Samantha said: “Well, I would tell you, but then I would have to kill you, so…. I don't want to find myself in locks and stocks quite frankly. It wouldn't be becoming.”

Appearing on the morning talk show to discuss her relationship (yet again) with Meghan, Samantha was quizzed by the hosts on whether her outspoken approach to their family matters was something that should be questioned.

Making her stance very clear, Samantha responded: “Let's face it, we all have to survive, money makes the world go round, so if you want to call that cashing in, that's fine. But no one in media would refuse a paycheck for talking about the royals."

“For someone to say, ‘Oh you shouldn't take any money, you should turn down a paycheck', go tell your boss you don't want a paycheck for interviewing me because that's cashing in," she argued.

While showing little concern about the headlines that she’s driven recently around the Markle family’s personal matters, Samantha did address her recent explosive outburst on Twitter towards the Duchess of Sussex and her relationship with father, Thomas Markle. Admitting that she regretted it “to a degree," she explained: “I felt as though if something were to happen to him, and he passed away, I don't think any of us could live with the fact that he died unhappy and there was not closure. I believe in her heart that she would want that also.”

Suddenly, your siblings don't seem half bad. And now, let's take a moment to pray for the Kensington Palace PR team in case Samantha's TV appearance really does go ahead.

Getty Images
Related Story
Shop Every One of Meghan Markle's Best Looks
Lucy Wood Contributor, MarieClaire.com Lucy Wood spends most of her time writing about celebby things, reading books, and waiting for the glorious day that she have enough millions for a pet sloth.
This content is created and maintained by a third party, and imported onto this page to help users provide their email addresses. You may be able to find more information about this and similar content at piano.io
Advertisement - Continue Reading Below
More From Celebrity
Harry Said the Queen and Philip Were "Adorable"
Kate Middleton Played Tennis With Emma Raducanu
Advertisement - Continue Reading Below
Tom Felton Collapsed on a Golf Course
Ashley Olsen Made a Rare Red Carpet Appearance
Harry Carries Briefcase That Reads "Archie's Papa"
Meghan Markle and Prince Harry Arrive in NYC
Kate Middleton Looked Radiant in Cream
People Are Convinced Kylie Is Having a Boy
Kim Kardashian's Met Gala Ponytail Cost $10K
Megan Fox and Kourtney Posed for Sexy Skims Pics