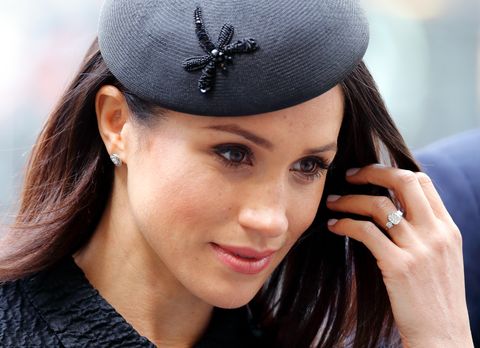 Meghan Markle must be having a difficult week. Just days before her wedding, she isn't dealing with only the last-minute details of her big day—how's the cake? Will the flowers arrive on time? Is the guest list finalized?—she's also living out some major, rather heart-wrenching family drama in front of the whole world. And her half-sister has confirmed that drama probably won't stop.

In an interview with TMZ, Samantha Grant defended her right to say whatever she wants regarding herself or her father—even if Meghan doesn't want her to. "If it's about my life or my father's, there's something in this country known as freedom of speech. She doesn't have a copyright on that," Samantha told TMZ. "She's way out of her league to tell me that I can't speak."

Related Stories
So, Who Will Walk Meghan Down the Aisle Now?
Meghan's Dad Changed His Mind About the Wedding
Who Are Meghan and Harry's Bridesmaids & Page Boys

"She's not going to tell me I can't speak about my life or my father's where it's a matter of public self-defense because the media is disparaging us," she continued. "I'm not going to take it, she's not qualified to suggest that I don't."

This pronouncement comes after Grant claimed responsibility for the staged paparazzi photos of Meghan and Samantha's father, Thomas Markle, reading books on Britain and checking out cute pictures of Meghan and Harry online. Following the revelations about those photos, it's unclear whether Thomas Markle will attend the royal wedding this weekend. While he initially stated that he planned to skip the big day "because he doesn't want to embarrass the royal family or his daughter," new reports say he is undergoing surgery after suffering a heart attack last week.

There's no evidence that Meghan has tried to silence Samantha. While a source told US Weekly that Meghan is "upset and disturbed by the entire ordeal," and TMZ reported that she called and texted her father to say that "she loved him and was concerned about his health," the bride-to-be hasn't spoken publicly on the matter. On Monday, Kensington Palace released the following statement:

"This is a deeply personal moment for Ms. Markle in the days before her wedding. She and Prince Harry ask again for understanding and respect to be extended to Mr. Markle in this difficult situation."