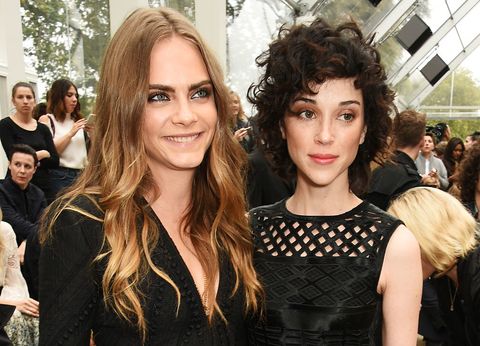 Cara Delevingne and St. Vincent have reportedly split after a year and a half together. The Sun claims the supermodel's relationship with the singer, whose real name is Annie Clark, started to take its toll a month ago when their long-distance relationship became "too much."

"Cara and Annie still care about each other, but pressures of the long-distance romance just became too much," a source told the newspaper. "The cracks were beginning to show on Cara's birthday in August when Annie wasn't there for her party.

"Instead she posted a very flat birthday message on Instagram. They decided to call it a day but remain pals and are hoping they can work things out as its no doubt they really love each other," the source continued. "But at the moment Cara has been trying to distract herself by partying."

The break-up report comes after Delevingne, who has recently been seen at the Burning Man Festival in Nevada, shared the following quote on her Instagram page. "You can't live a positive life with a negative mind," the post reads. Neither person has publicly addressed the breakup reports on social media.

Delevingne, 24, revealed she was "completely in love" with St Vincent in an interview just a month ago. "Before, I didn't know what love was—real love," she said. "I didn't understand the depth of it. I always used to think it was you against the world. Now I know the meaning of life is love. Whether that's for yourself or for the world or your partner."

Katie Frost Senior Editor Katie Frost is Deputy News Editor in the Newsroom, covering lifestyle, travel, food, celebrity and royals-related content.
This content is created and maintained by a third party, and imported onto this page to help users provide their email addresses. You may be able to find more information about this and similar content at piano.io
Advertisement - Continue Reading Below
More From Celebrity
Royal Family Shares Rare Photo of Prince Philip
Chloe From 'Too Hot to Handle' Is in 'The Circle'
Advertisement - Continue Reading Below
There's Drama Over Prince Harry's Funeral Attire
Jennifer's Rep Breaks Silence on Adoption Story
Princess Eugenie's Prince Philip Tribute
Serena Williams Signed a Major TV Deal With Amazon
Chrissy Wrote Luna the Sweetest Birthday Message
Prince Harry Has Met Princess Eugenie's Son August
The Queen Returns to Work After Philip's Death
A Brief History Lesson on Brad and Jen